In a repeat of last weeks’ highly choreographed FDA emergency-use approval of Pfizer’s COVID-19 vaccine, which was yesterday delivered into the arms of the first health-care workers in NY, the FDA released a paper offering a more detailed outline of the trial data for Moderna’s mRNA vaccine. Since both vaccines have shared headline efficacy numbers around 95%  (Pfizer initially said efficacy was around 90%, though it offered a revised assessment showing the 95% number after being one-upped by both Moderna and Vladimir Putin) it’s perhaps unsurprising that their efficacy graphs look so similar. 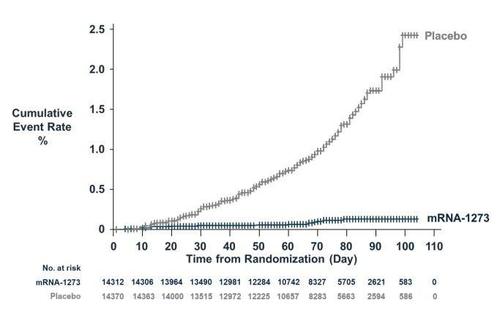 Another detail from FDA briefing document on Moderna #covid19 vaccine – data suggest vaccine efficacy is higher (96%) in people younger than 65 than those 65+ (86%) pic.twitter.com/6QifORl4eC

Looking beyond the headline number, the details clearly suggest that the vaccine is less effective for patients who are the most vulnerable to severe, or perhaps deadly, course of infection.

New cases in the US dropped back below the 200K threshold in the 24 hours to Monday even as hospitalizations topped 110K for the first time. 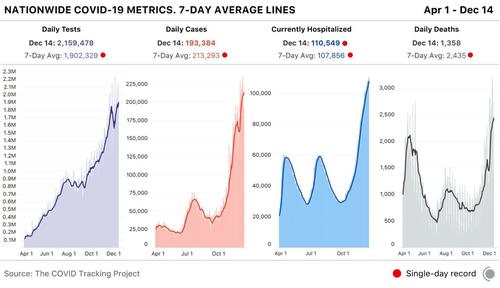 The Western US, led by California, has officially outpaced the Midwest as the locus of newly confirmed COVID-19 cases, although the northeast, led by CT, MA, NJ and NY…

…is once again catching upwhile heightened restrictions in the Midwest have apparently led to the start of declining cases. 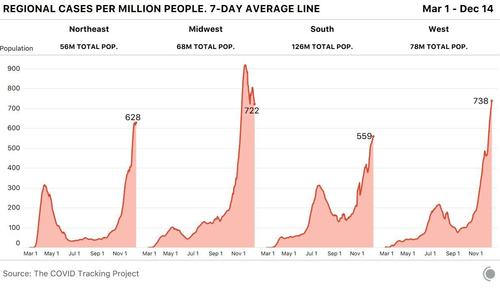 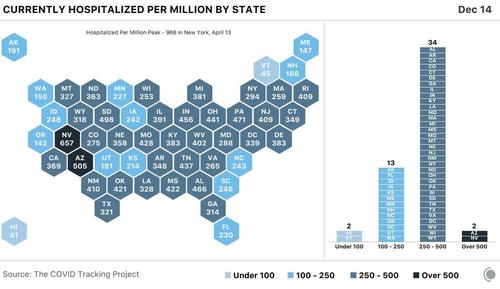 Perhaps the biggest European news overnight involves the UK, where British doctors confirmed the rollout of the Pfizer vaccine beyond the nation’s hospitals will take longer than anticipated, the latest in a string of delays affirmed by manufacturers and government bureaucrats.

In other major European news: as reports about the sudden strain on the Swedish health-care system have been piling up, Sweden’s capital Stockholm is considering postponing all non-essential health-care services to free up resources as nurses are apparently quitting at unprecedented numbers, burning the system’s candle at both ends.

The proposal, which would be effective until the end of January, is due to be discussed later on Tuesday, according to Bjorn Eriksson, director of health and medical services for the Stockholm region.

Here’s some more COVID-19 news from overnight and Tuesday:

The rollout in the US and the UK (newly free of Brussels’ authority) is starting to chafe the Europeans, who are facing pressure to expedite the approval process for the Pfizer and Moderna vaccines as cases, deaths and hospitalizations remain elevated across the Continent. European Medical Agency is now reportedly aiming to approve the Pfizer vaccine on Dec. 23rd, according to Bild citing sources, the first suggestion that it might come before the new year.

Germany and the Netherlands (and possibly Italy and other countries too who may follow) have ordered another round of severe lockdowns, which will last through the Christmas holiday. As the day goes on, will we see any new lockdown orders, either in the US, or Europe? Maybe in Denmark? We shall see.