Legislators introduce a bill that mandates free medical for everyone while expanding the list of items covered. 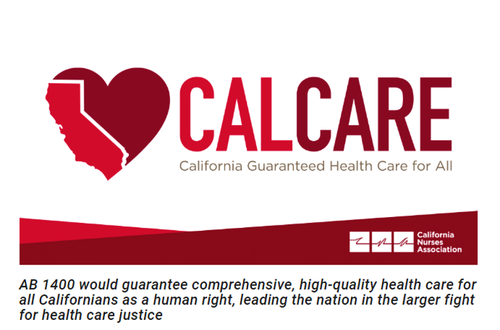 Renewing its commitment to the larger fight for health care justice, the California Nurses Association (CNA) is pleased to sponsor Assembly Bill 1400 (Kalra), the California Guaranteed Health Care for All Act (CalCare), which would guarantee comprehensive, high-quality health care to all California residents as a human right. The establishment of the CalCare program is an improved Medicare for All-type health care system.

Sponsored by CNA and authored by Assemblymember Ash Kalra, AB 1400 will ensure that all Californians, regardless of employment, income, immigration status, race, gender, or any other considerations, can get the health care they need, free at the point of service.

Californians overwhelmingly support the transition to a single-payer health care system: 57 percent of all Californians supported replacing private insurance with guaranteed coverage provided by the government

A: Traditional medical services, dental care, prescription drug coverage, long-term care, and mental health and substance use treatment for everyone at point of service.

There will be no copays or deductibles. It’s all totally “free”.

The Democratic governor faces the increasingly likely prospect of a Republican-driven recall election later this year. The single-payer bill adds to his political peril from the left if he doesn’t express support, and from the right if he does.

While the measure does not assign a price tag to the overhaul, a separate single-payer bill that failed in 2017 would have cost an estimated $400 billion each year.

The introduction of a single-payer proposal this year forces Newsom into a delicate position. The first-term governor, who said he supported the creation of a state-based single-payer health care system when he ran for governor in 2018, has since distanced himself, expressing doubt that California can embark on such a massive transformation on its own.

How Do We Pay For This Free Stuff?

No one seems to have an answer except Ash Kalra who claims the system will pay for itself after rerouting federal dollars for Medicare, Medicaid and other programs into CalCare.

The system would eventually cost less, he said, because it would simplify health care financing, end for-profit care and cut out private middlemen.

With the government (taxpayers) paying every bill, what forces are holding down any costs (nurses, beds, doctors, drugs, operations, etc.)?

This bill is fiscal madness.

Where is This Bill Headed?

Likely nowhere, but we are talking about California so it’s impossible to rule this out.

Millions Of Hot Pockets Recalled, May Contain “Pieces Of Glass And Plastic”

How the State Spreads Mass Hysteria