While we have previously laid out the bullish case for uranium stocks in general, and Cameco (CCJ) – which controls the world’s largest high-grade uranium reserves and low-cost operations and is one of the largest global providers of the uranium fuel – in particular (here, here, here and here), today this thesis got a swift boost after a note from BofA which predicted that delayed plant closures could boost global uranium demand by 26Mlbs, unleashing a meltup in uranium stocks… 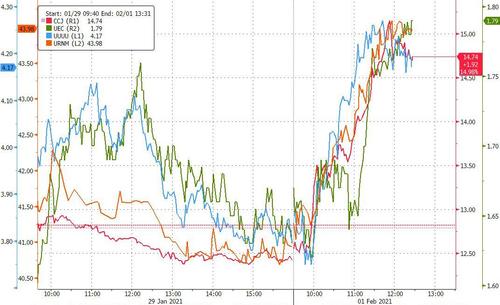 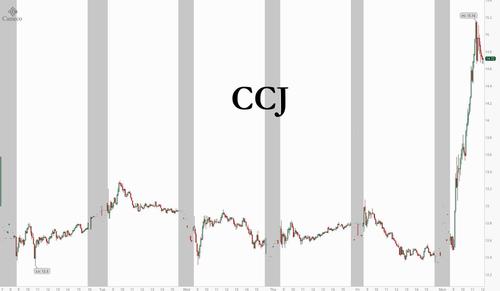 In a note published this morning, BofA analyst Lawson Winder, asks “what if expected U.S. nuclear retirements over the next 10 years were postponed?”

The reason for this speculation is that with the President Biden’s inclusion of nuclear in his clean energy plan,the U.S. Democratic party increasingly embracing nuclear and Republican support, he examines “the benefit from hypothetical measures to prolong nuclear plant operating lives.”

He then calculates that if expected closures in 2021-2030 were delayed to beyond 2030, “an additional 26Mlbs of global uranium (U3O8) demand over that period.” And while this is just a 2% increase, it helps, “plus such a shift could lead to increased pressure on utilities to move forward new contracting.”

Some background which we covered previously, per Winder:

In President Biden’s ‘Plan for a Clean Energy Revolution and Environmental Justice’, nuclear, including the development of small modular reactors (SMRs), is included as a low and zero-carbon technology to help achieve its 100% clean energy target. With this, the Democratic party more broadly embracing “technology-neutral” de-carbonization of U.S. power generation and broad Republican support, U.S. nuclear plants that are planned for closure could receive federal government help to continue operating.

An extension of viable NPP lives would have a major impact on US uranium demand because between 2021 and 2030, some 12 nuclear reactors are expected to close in the US alone. Together, they account for more than 10,000 MW of electrical generating capacity and approximately 4.5Mlbs of annual uranium (U3O8) demand (per BofA calculations which assume an average capacity factor of 91%, a 4.5% product assay and 0.20% tails assay) or just under 3% of 2021E global reactor requirements. Five are currently expected to close in 2021, all earlier than required by the operating licenses. Of these five, only Indian Point 3 (around 0.45Mlbs of annual demand) is beyond the point that would be consider savable.

Putting this together, if the 12 scheduled reactor closures were to be postponed to beyond 2030, it would add 30Mlbs of demand to BofA’s forecast for 2021-2030, or 26Mlbs if Indian Point is excluded. This amounts to 2% of BofA’s current 2021-2030 global demand forecast, while “while not huge, could lead U.S. fuel buyers to move forward plans for major new contracting: consider that those 26Mlbs are 23% of total U.S. utility inventories at year-end 2019 of 113Mlbs and inventories today are quite likely lower post 2020’s supply disruptions.“ 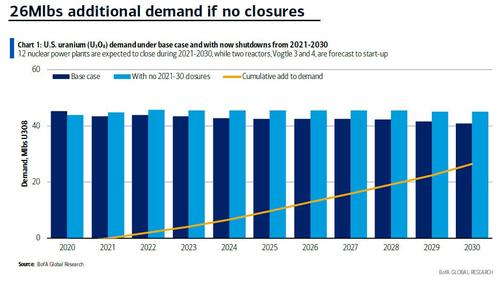 Naturally, this would be extremely bullish for uranium miners and explains the action in the sector today.