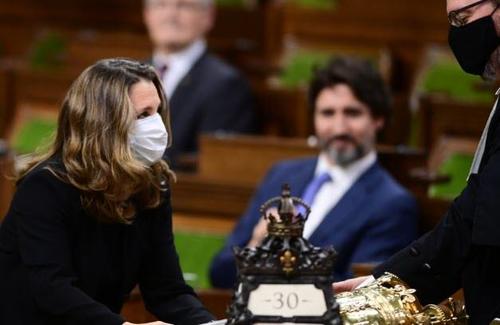 Overall, as Bloomberg reports, the nearly C$500 billion ($399 billion) budget is a bet that voters will support Trudeau and Freeland’s vision for the government to play a bigger role in the country’s economy over the long run.

“This budget is about finishing the fight against Covid. It’s about healing the economic wounds left by the Covid recession,” Freeland said in prepared remarks Monday.

“And it’s about creating more jobs and prosperity for Canadians in the days — and decades — to come.”

The headline item is new childcare and early learning funding of about C$30 billion over five years, with the intention of creating a subsidized program offering C$10-a-day care

Freeland announced various “green” initiatives, including various tax incentives, including a 50% cut to the general corporate and small business income tax rate for companies that manufacture zero-emissions technologies, and an investment tax credit to speed up adoption of carbon capture technology with the goal of reducing emissions by at least 15 megatonnes of CO2 annually.

“The resource and manufacturing sectors that are Canada’s traditional economic pillars — energy, mining, agriculture, forestry, steel, aluminum, autos, aerospace — will be the foundation of our new, resilient and sustainable economy,” Finance Minister Chrystia Freeland said in her planned remarks to Parliament.

“Canada will become more productive and competitive by supplying the green exports the world wants and needs.”

But the populist budget could not just incentivize, it needed to punish too… (in the name of feminist fair share seeking we presume). The measures won’t bring in a lot of revenue but will generate some headlines.

As Bloomberg notes, the budget will now face a vote in the House of Commons, where the Liberals will need the support of at least one opposition party. Failure to pass it would trigger an election.

The Loonie is largely unaffected but the long-end of the Canadian yield curve is surging higher as the government plans to issue a record C$121 billion ($96 billion) of bonds maturing in 10 years or later, up from C$107 billion in previous fiscal year that ended March 31 (and includes a reopening of 50-year issue)… 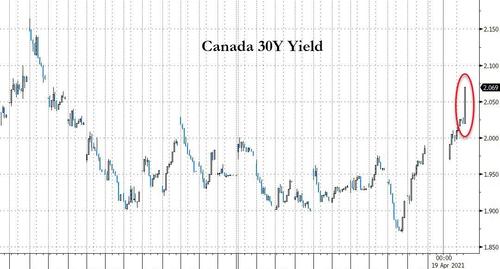 The virtue-signaling government also disclosed that, subject to market conditions, it targets C$5 billion in its first green-bond debut, the first of “many”.

House Dems Introduce Article Of Impeachment Against Trump, Have The Necessary Votes

NYC Spent Nearly Half A Million Dollars Per Inmate In 2020, Report Says