Capital Controls Imminent As Turkey Slides “Beyond Point Of No Return”

Over the weekend, we said that the pain for Turkey’s currency, economy and society under its ruthless depositic president who arbitrarily decided to sack his central bank head because he didn’t believe in Erdoganomics, will lead to much more pain.

Predictably, this morning there has been a flood of negative Turkish macro commentary, starting with SocGen’s Phoenic Kalen who praised last week’s 200bps rate hike only to slam Erdogan’s shocking decision, writing that with Naci Ağbal’s removal from the CBRT, “Turkey loses one of its last remaining anchors of institutional credibility” adding that:

During his short tenure, Ağbal had succeeded where various predecessors had not – in cultivating trust in the central bank’s inflation-targeting framework, in restoring monetary policy independence, in encouraging international investors tore-engage with the crisis-prone Turkish narrative, in driving an 18.0% rally in TRY against USD,and most crucially – in arresting and even reversing the damaging trend of dollarization in the economy. In January, the Finance Ministry was able to place USD 3.5bn in Eurobond sales that were heavily over-subscribed, attracting over USD 15bn in the order book. Meanwhile, the latest weekly data point as of 12 March showed that Turkish residents’ FX deposits held at local banks had declined to USD 230.3bn, down from the peak of USD 236.1bn registered in January. These examples offered compelling evidence that Ağbal’s policies were succeeding in bolstering both foreign and local investors’ confidence regarding prospects for Turkish assets, in the belief that economic and monetary policies would return to more orthodox realms.

Alas that’s all in the past, and today – with the Turkish lira tumbling as much as 17% against the dollar during early hours of Asia trading, not too far from its record low of 8.5793 in November –  Kalen writes that the Turkey’s lira will come under more pressure in the coming months due to weak foreign-exchange reserves and potential foreign outflows. Specifically, the bank expects the lira to decline to a new record low of 9.70 per dollar by the second quarter.

How do we get there? According to Kalen, now that Erdogan has fully usurped the central bank, crashing what little credibility it had left, Turkey faces nothing less than at least four circles of hell including:

Summarizing the “Battle Royale ahead” Kalen writes that “the new CBRT Governor Kavcıoğlu has expressed in a statement on the central bank’s website that future MPC meetings will be held as scheduled, meaning no imminent emergency rate cut meeting between now and the 15 April 2021 MPC meeting. It is very likely that the new governor will attempt to undo the latest 200bp hike at the 15 April meeting, deploy substantial reserves between now and then to try to stabilize TRY, subsequently lose the currency battle with markets, and ultimately have to engage in emergency hikes down the road to halt TRY’s decline.” 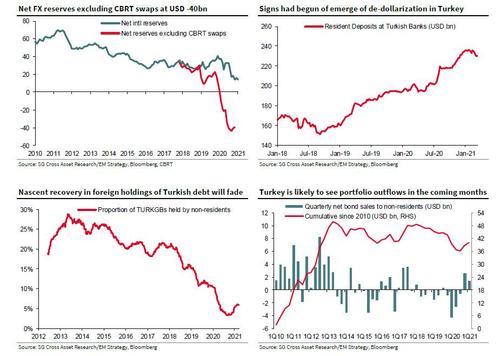 In short, one way or another Turkey will still end up where it was before Erdogan’s shock announcement but in the meantime its inflation will soar and its currency will crater to new record lows. In this context, it is hardly a surprise then that Kalen, who praised the CBRT on Thursday has the following advice to SocGen clients:

We recommend exiting from any long positions in Turkish assets, considering the profound shift in policymaking and the likely financial turmoil ahead. Our short EUR-TRY trade has hit its stop loss and we have closed out.

Of course, now that control over the currency and inflation is explicitly political, Erdogan will do everything he can to stabilize the economy and outflows, and while SocGen does not envision “hard” capital controls, SEB chief EM strategist Per Hammarlund disagrees, and writes that Turkey “probably intends” to impose capital controls to stabilize markets

“The authorities will be left with two choices, either they pledge to use interest rates to stabilize markets, or they  impose capital controls,” Hammarlund writes adding that “given the increasingly authoritarian approach that President Erdogan has taken, capital controls are looking like the mostly likely choice.”

Looking at the currency, the SEB strategist notes that TRY will be on a roller-coaster ride driven by capital flight, central bank intervention and bargain hunters, and expects “swings of 15% in either direction.” That said, the volatility cannot last long because it would severely compromise Turkish banks and corporations’ ability to service foreign debt. And while Turkish authorities may want to impose capital restrictions for a limited period of time, but that time “may last for years”

In terms of what form capital controls could take, Hammarlund writes that they could come as limitations and taxes on earnings remitances and curbs on the ability of locals to buy foreign currency.

One final question we have that has not been addressed by Wall Street, is how much longer will the Turkish population tolerate Erdogan’s increasingly erratic behavior which is now dramatically and adversely impacting the livelihood of this extremely geopolitically valuable nation. And, related to that, how long before this currency, debt and sovereign crisis morphs into a political crisis, leading to another “coup”, although much less fake than the 2016 one…

Update: CCTV Cameras Are Being Installed All Over Green and Red Zones in Washington DC