After releasing a statement earlier Thursday afternoon condemning the riotous behavior and revealing that the officer who shot and killed Ashli Babbitt, Steven Sund, the chief of the Capitol Police, has just resigned.

Sund’s resignation will go into effect on Jan. 16, meaning he will be gone before any potential unrest tied to Joe Biden’s inauguration on Jan. 20. A police spokeswoman said Thursday that the department’s union called for a “change at the top.” 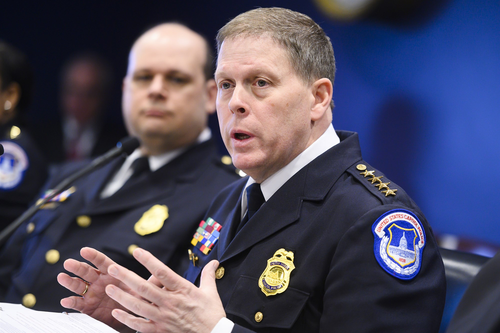 According to NBC News, officers are “frustrated and demoralized” with how a lack of leadership undermined the response to the mob, said Gus Papathanasiou, the union chairman. Papathanasiou laid the blame on a failure of planning by Sund and the rest of the Brass, while praising officers on the ground for their work.

“We prioritized lives over property, leading people to safety,” Papathanasiou said in his statement. “Not one Member of Congress or their staff was injured. Our officers did their jobs. Our leadership did not. Our Law Enforcement partners that assisted us were remarkable.”

The statement didn’t quite call for Sund’s resignation.

In his statement earlier, Sund commended officers earlier Thursday, calling their actions “heroic” and slammed the chaos that erupted as “criminal riotous behavior.”

Earlier, in an interview with NBC’s “Today” show, former US Capitol Police Chief Terrance Gainer slammed his successor’s handling of the incident as a “failure” and added that it “raises a lot of questions.”

Finally, CNN reports that a Capitol Police Officer – presumably one of the 14 who was injured in yesterday’s violence – has died.

A US Capitol Police officer has died from events stemming from Wednesday’s riot at the Capitol, three sources confirmed to CNN.

The police officer is now the fifth person to die as a result of the day’s violence. One woman was shot and killed by Capitol Police as the crowd breached the building and three others suffered medical emergencies that proved fatal.

Rioters on Wednesday breached the Capitol building and the Senate chamber, ransacked the offices of Pelosi and other Capitol offices, and a laptop was stolen from the office of Oregon Sen. Jeff Merkley.

Authorities have already arrested nearly 70 people in connection with Wednesday’s chaotic ransacking of the Capitol building, and presumably anyone responsible for the officer’s wounds and/or the killing of the officer who died Thursday will be high on prosecutors’ list for arrest and prosecution. Aside from Babbitt, three others died of medical emergencies during yesterday’s unrest.

REPORT: So Many People Are Fleeing California They May Lose A House Seat And Electoral College Vote

BREAKING: President Trump Tweets Out Big News in Pennsylvania — State Senators Ask for Election Certification to Be Delayed Due to ‘Questionable Activities’