In the span of a year, Chamath Palihapitiya has engineered a series of successful deals involving SPACs – essentially blank-check companies that are taken public, before engineering a “reverse IPO” with a private (or sometimes, another public) target. In what appears to be his latest effort, shares of his Hedosophia Holdings Corp V – ticker $IPOE – is nearing a deal to merge with social finance. 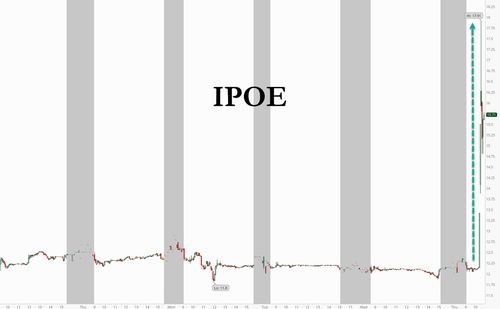 Social Finance, or SoFi, as it’s more popularly known (thanks to a national ad campaign that helped push the company’s business) allows Americans to borrow or lend via a “crowdsource” model. Even in an age of low interest rates, the company has benefited from the explosion of debt in the years since the financial crisis. It’s mobile-focused business model is an example of the type of “disruptive” fintech that keeps bankers up at night.

Shares of $IPOE surged 48% on the news, triggering a trading halt. Shares of the blank-check firm were already trading above their offering price ($10), given Social Capital’s reputation for bringing some of the year’s hottest deals to market. The “V” in the SPAC’s name signifies that this is the fifth deal.

Palihapitiya’s Social Capital has sponsored a series of SPAC deals involving Virgin Galactic, Opendoor, Clove Health among others. According to Reuters, which broke the news, the deal is expected to be announced in coming days, and could value SoFi at more than $6BN.

For those looking for a better understanding of what SPACs are and how they work, Harvard Law’s Forum on Corporate Governance has published a helpful explainer.

Some 200+ SPACs raised more than $73BN over the past year, according to Goldman Sachs. That’s more than the total raised via SPAC from the past 10 years.

And by the looks of it, that trend is set to continue.

The ‘New Confederacy’? Yes, It’s Time To Unite Against The Globalist Reset