The Chicago Teachers Union announced on Sunday that its members voted to defy an order to return to in-person instruction on Monday, citing concerns over COVID-19. Officials with Chicago Public Schools (CPS) have made clear that refusing to return when ordered would be tantamount to an illegal strike. 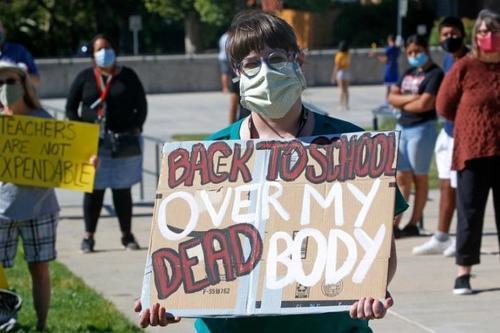 CPS, the nation’s third-largest district, ordered roughly 10,000 K-8 teachers and other staffers to return to school on Monday, while roughly 70,000 students are expected to show up for part-time in-person classes on February 1 – when CPS says they still expect K-8 teachers to appear in-person. There has been no return date set for high school students.

The teachers union says that the reopening plan fails to take the health of teachers into account, and has called on the district to allow them to continue teaching from home.

“Here you have the most lethal health emergency that we’ve had in 100 years, and there is so little guidance that everyone is doing different things,” said Randi Weingarten, president of the American Federation of Teachers last week, adding that a national strategy “costs money, it requires good management, and it requires working together.”

The two sides have been negotiating for months and talks continued after the result of the vote was announced in the hopes of reaching a deal.

CPS officials said Sunday that they had agreed to delay the teachers’ return for two days to give the sides more time to negotiate. But they said K-8 teachers would still be expected to resume in-person instruction on Feb. 1.

“We now agree on far more than we disagree, but our discussions remain ongoing, and additional time is needed to reach a resolution,” the district’s CEO, Janice Jackson, said in a statement.

School officials have argued that remote learning isn’t working for all students, including many low income and Black and Latino students who make up the majority of the district. The district’s safety plan includes thousands of air purifiers, more cleaning and a voluntary testing program. –Fox News

CPS turned to full-time online instruction last March due to the pandemic, though it has been gradually welcoming some of its roughly 355,000 students back. Earlier this month, thousands of pre-K and special education students resumed in-person instruction, while teachers who failed to return were punished, according to the report. CPS reports that just 19% of pre-K and special ed students who were eligible for in-person learning showed up this month – a lower figure than December when around 6,500 of the nearly 17,000 eligible students attended.

(FORUM) For most: Is a college education required for success?