Chief Economist: The Unprecedented Scale Of US Fiscal Stimulus Will Lead To Epic 2023 Bust

Suppose Congress passes something close to Biden’s Administration stimulus proposal of $1.9 trillion. In that case, that will lift the cumulative amount of fiscal stimulus in the past 12 months to $5 trillion—three tranches $2.2 trillion, $900 billion, and $1.9 trillion.

In the past year, nominal GDP totaled $21 trillion, so the cumulative injection of fiscal stimulus amounts to almost 25%.

Nothing in modern times comes close, especially during peace times. CBO published a report in 2010 on the military costs of significant wars. The military war costs of World War 1 amounted to 13.6% of GDP and World War 11 35.8%—-so the current spending/stimulus is in the middle of the two World Wars. 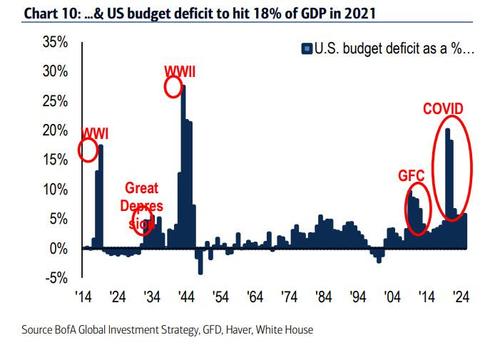 During World Wars, activity in the private sector is depressed. That’s not the case today. The housing sector is booming, with housing starts at the highest levels in 15 years, and prices are rising double-digit to record levels. At the same time, the manufacturing sector is experiencing a mini-boom in orders and production.

Given the scale of fiscal stimulus, one would expect the Fed to be thinking of “leaning against the wind.” But not this Fed–the Fed is using the same playbook from the Great Financial Recession, providing unneeded stimulus to the red-hot housing market.

What’s the economic and financial endgame? It’s hard to see anything but a “boom-bust” scenario playing out with fast growth and rising market interest rates in 2021 and early 2022, followed by a bust in late 2022/23 when the fiscal stimulus/support dries up.

The US experienced mild recessions following the sharp drop in government military spending after the Korean and Vietnam wars—-and back then, the scale of military expenditures amounted between 2% and 4% of GDP. The “sugar-high” today is unprecedented, raising the odds of a harder landing.