China is now starting to build and/or reinforce border walls near its Southeast borders – “stirring up controversy” with neighboring countries, according to a new report from Australia’s ABC.  While much of the focus in the U.S. over the last 4 years was decrying President Trump’s calls to build a wall domestically, China was doing the exact same thing on its border with Vietnam and Myanmar.

“It looks like a national program,” one Southeast Asia expert said.

The project in Vietnam, which is still being extended, has a 4.5 meter high iron fence topped with barbed wire. It was built between 2012 and 2017 and stretches 12 kilometers, the report says. 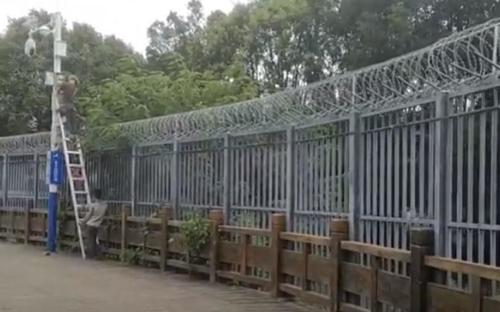 Additionally, the country has also erected a 659 km fence alongside China’s 2,000 km border with Myanmar. The project was completed in December of last year, according to the report. In some cases “the walls are designed not just to keep the virus out, but to keep people in,” ABC reports.

The same expert argued that smuggling could be the main reason for erecting such walls. He noted that “illegal cross-border activity has been a major headache for both China and Vietnam since 1979″. The illicit activity includes trafficking of Vietnamese women to China. “At least” 100 girls were sent back to Vietnam from China every year, ABC had previously reported. Some, however, were stolen and/or sold – and never heard from again.

China explains the wall by doing what most governments around the world have been doing for the last year – blaming Covid. “Before the pandemic, there was no wall, but only short wooden fences,” a YouTuber, who captured video of the wall along Myanmar, said.

You can see video of the border wall here:

What Hypocrisy? Democrat Calls for Plan to Surround US Capitol with Permanent Fence to Keep Lawmakers Safe