China Economy Rolling Over Hard Ahead Of Lunar New Year

First the good news: after a recent spike in “domestic” new Covid cases across China (as opposed to the laughable “imported” cases), Beijing’s measures of targeted lockdown and massive testing and tracing appear to be effective in containing the recent Covid outbreak in Northern China. The seven-day average of domestic cases fell to 27 as of 5 Feb from the peak of 111 on 18 Jan.

Shijiazhuang city of Hebei Province, one of the hotspots, lifted the lockdown on 29 Jan and started to resume work/production on 3 Feb. Meanwhile, on 30 Jan, the central government urged local governments not to ratchet up unnecessary travel barriers and social distancing measures in low-risk areas.

Naturally, it was Beijing’s prerogative to halt any local outbreak ahead of the Lunar New Year week which begins this Friday, and which would have made any containment during the peak travel period impossible.On the other hand, tightened travel controls will adversely affect nationwide economic activities around the LNY time.

And so, whether it is due to partial covid-linked lockdowns, due to China’s ongoing attempts to contain and deleverage the country’s massive debt load, or simply as a byproduct of China’s credit impulse which as we discussed last December, is now rapidly shrinking, but most real-time indicators of China are showing a sharp slowdown across the economy which appears to be rolling over in everything from traffic and mass transit, to manufacturing even as prices of many goods (especially food) rose sharply, in what some may call a pre-stagflationary outcome

First, a look at traffic volumes, subway and migration which have clearly slowed down. 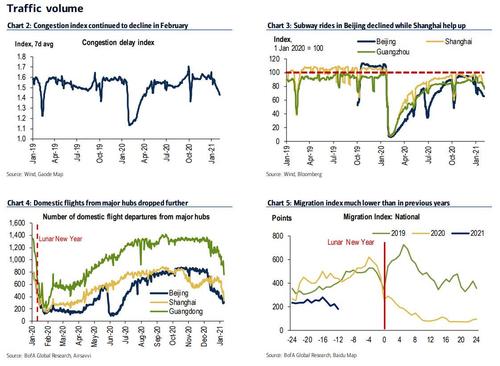 Industrial production has seen a more modest hit, mostly in just the past few weeks, even as copper and rebar prices have soared. 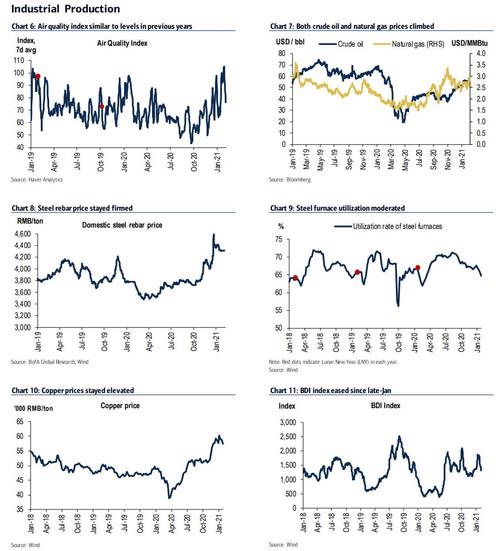 On the services side, the picture has remained more robust with both property and auto transactions solid although the recent surge in food prices has sparked some concerns about stagflation. 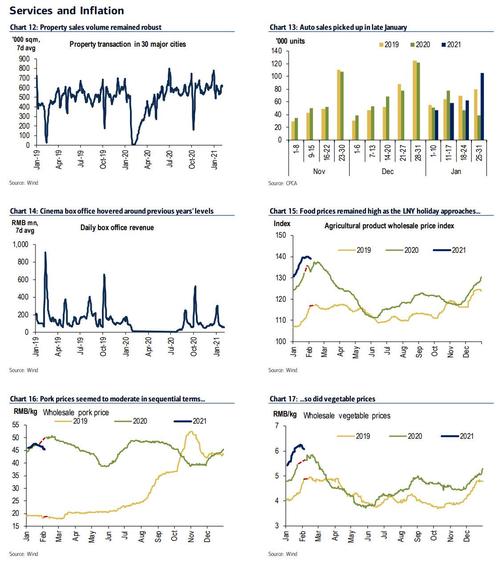 Perhaps the most interesting chart is one tracking the recent liquidity squeeze which sent overnight and 7-day repo rates soaring in late January, only to ease substantially after the PBOC resumed net OMO injections, which have been in line with recent years. Meanwhile, both government and corporate bond issuance have picked up in the days ahead of the LNY. 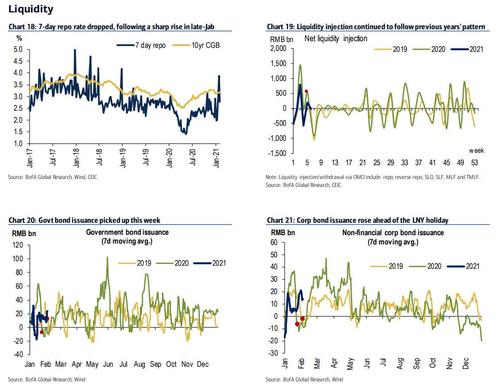 Putting the above data together, Nomura’s China economist Ting Lu writes that “the latest Covid-19 wave should be brought under control in coming months, but at the cost of a slower services sector recovery and a pause in policy normalization.” The bank lowered its 2021 real GDP growth forecast to 8.8% (from 9%), trimming Q1, but raising Q2 on the resurgence of Covid-19 and government countermeasures, while also trimming forecasts for activity, inflation and credit indicators. This is why:

While John Kerry Masquerades As Biden’s Climate Crusader, His Family Tools Around In Private Jet