China Emits More Carbon In 2 Weeks Than Australia Does In One Year: Think Tank

Authored by Henry Jom via The Epoch Times,

China emits more carbon dioxide in 16 days than Australia does in one year, according to new research published by a free-market think tank.

Australia’s net-zero emissions target would therefore be cancelled out by China in just two weeks, the Institute of Public Affairs (IPA) said in a press release on Wednesday. 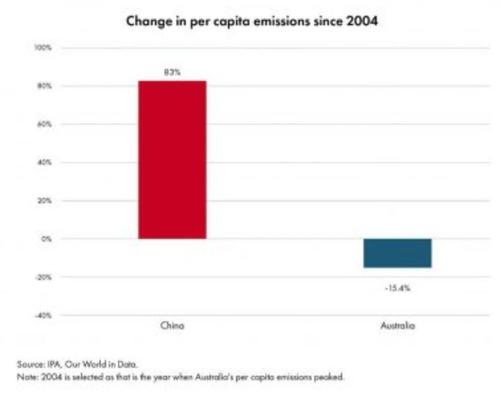 Globally, the report identified that Australia’s share of global carbon emissions declined from 1.3 percent in 2009 to 1.1 percent in 2019.

“Despite Australia’s negligible share of global emissions, under the Paris Agreement, Australians are subject to the deepest per capita emissions cuts in the developed world,” the report added.

However, Federal Labor Opposition leader Anthony Albanese looks set to committing his party to achieve net-zero by 2050, while Independent Member for Warringah Zali Steggall plan to introduce a Climate Change Bill to parliament in March.

Cian Hussey, Research Fellow at the IPA, said calls for Australia to adopt a net-zero emissions target would “ignore the significant economic, social, and humanitarian costs which would inevitably be the result of such a target.”

“It is reckless and futile for the political class to impose on Australians further severe cuts to emissions which costs jobs and livelihoods, while China—the world’s largest emitter—continues to rapidly increase its emissions without consequence,” said Hussey.

Earlier research by the IPA found that up to 653,600 jobs would be at “direct risk” if a net-zero carbon emissions target were put in place—particularly in the agriculture, heavy manufacturing, and coal mining industries.

While some Nationals have called for exemptions for the agricultural sector, Independent Zail Steggall said keeping the sector out of the zero-emissions target would mean the sector risked being charged carbon tariffs from other countries.

“There’s way too much focus on what might or might not happen in 30 years time rather than dealing with the challenges we face right now,” Canavan said.

“When I think about what the biggest challenge for my kids is going to be in their generation, I think it’s the rising aggression of the Chinese Communist Party in our region. Not carbon neutrality by 2050.”

WTI Extends Gains After Across The Board Inventory Draws