On the same day that China published a much stronger than expected (if largely laughable as we first noted and Michael Pettis subsequently confirmed) GDP print, making China the only major economy to grow in the “year of covid”, China customs data showed that grains imports soared to record highs in 2020 after tight domestic corn supplies pushed prices to multi-year peaks, driving demand for cheaper imports.

China, the world’s top agricultural market, bought a record 11.3 million tonnes of imported corn last year, according to General Administration of Customs data, exceeding the annual quota – which was set at 7.2 million tonnes – for the first time. 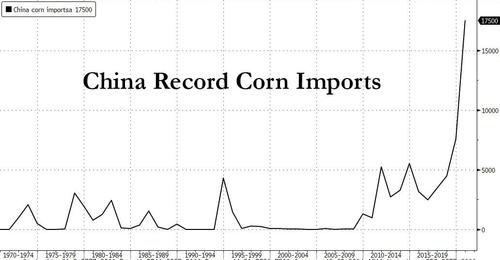 According to Reuters, in 2019 China only used 67% of its annual quota for corn and one-third of its quota for wheat. China has accelerated buying of global grains in the past year due to healthy demand from a recovering pig sector, and a domestic shortfall in corn supplies.

The table below shows imports of China’s major agriculture products in December, according to data released on Monday. The data did not provide a breakdown on the origins of the imports. Data on soybean imports was released earlier this month. 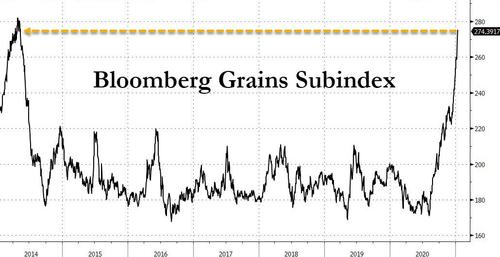 … prompting a very worried Albert Edwards to warn that a new and potentially much more violent “Arab Spring” revolutionary cascade could be imminent unless food prices stabilize and revert to much lower levels (see “Why Albert Edwards Is Starting To Panic About Soaring Food Prices“.)

The End Is Coming Very Soon, and Few Americans Are Willing To Do Anything To Stop It