China Is Now Competing With The World For Capital

The largest hedge fund implosion since Long-Term Capital Management blew up in 1998 has left few, if any, scars on financial markets.

A group of stocks linked to the liquidation of Archegos Capital rebounded Tuesday, suggesting the positions have largely been unwound. With that episode running its course, the markets were generally quiet with slightly higher yields and the outperformance of value stocks pointing toward the return of the reflation theme. A stronger dollar, though, is putting commodities under pressure. Bloomberg’s commodity index is starting to diverge from Treasury yields.

Back in China, FTSE Russell confirmed that Chinese bonds will be included in its index with a weighting of 5.3%, as expected. But the implementation won’t start until October and will take three years to complete, which is much longer than anticipated. The immediate market impact is negligible, but the move marks a milestone as Chinese bonds will now be included in all three major bond benchmarks, including those by Bloomberg Barclays and JPMorgan.

China is slowly but surely starting to erode the dominance of advanced nations in the bond market. To make room for Chinese bonds in the benchmark, FTSE cut the weighting of U.S. Treasuries by 1.9 percentage points to about 35%, which is likely to result an outflow of $49 billion, according to HSBC. Japan’s weighting was reduced by about one point to 16%. 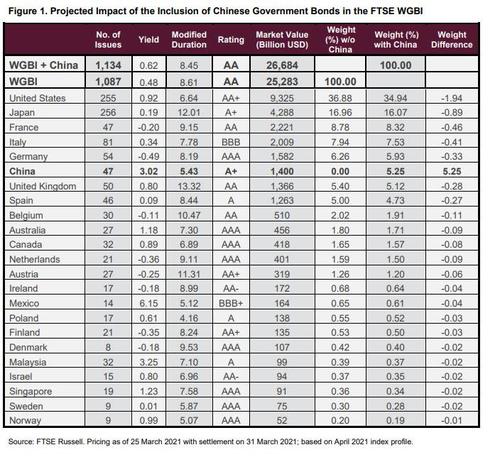 In other words, China is starting to compete for capital from international investors at a time when governments are borrowing an unprecedented amount of money. Last year alone, Chinese government bonds attracted about $100 billion of overseas inflows, which is equal to 44% of the increase of foreign holdings in U.S. Treasuries.

Chinese bonds arguably remain under-represented in global benchmarks. They have the same A+ credit rating as Japanese bonds, offer yields that are about 280 bps higher and carry less than half of the interest-rate risk. Yet, the weighting of Chinese bonds is less than a third of the Japanese securities. They’re even weighted less than lower-rated Italian bonds.

Granted, Chinese bonds have their drawbacks. The lack of liquidity means fewer securities meet the criteria to be included in the benchmark. The lack of access to the repo and futures markets also limits foreigners’ interest. And then there are the country’s issues with the rule of law and tensions with the West.

Still, as demonstrated in the recent global debt rout, Chinese bonds provide diversification for investors given their low correlation with other markets. Their sensitivity to U.S. yields has fallen to the lowest in years, according to JPMorgan. 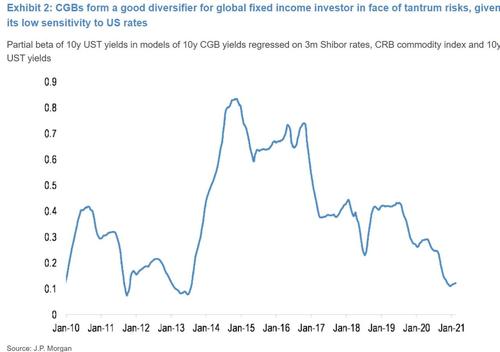 What’s the Matter With the Democrats?

Geico Ordered To Pay $5.2 Million To Woman Who Contracted HPV In Man’s Car