China’s money market rates surged after the People’s Bank of China drained cash from the financial system, just as a central bank adviser warned about bubbles in markets.

The overnight repurchase rate soared 28 basis points to 2.77%, the highest since October 2019, and just a month after it hit a record low. 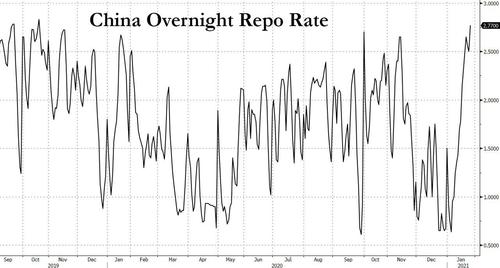 At the same time, the cost on 7-day repurchase agreements jumped 36 basis points to 2.79%. Earlier in the day the PBOC withdrew a net 78 billion yuan via open-market operations, the most in two weeks. 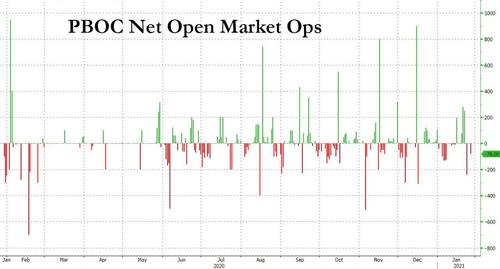 It wasn’t just the PBOC’s liquidity drain however: the rate spike was also catalyzed by a stark warning from PBOC adviser Ma Jun, who spoke at a wealth management forum where according to the 21st Century Business Herald said bubbles have formed in the stock and property markets, and he proposed a shift in monetary policy.

“Whether this situation will intensify in the future depends on whether monetary policy is appropriately changed this year,” he said. He added that if not, such problems would “certainly continue” and lead to “greater economic and financial risks in the medium- and long-term.”

He also said that there will be less demand for monetary expansion as corporate profits will improve, reducing their reliance on debt financing.

To be sure, Chinese regulators have already moved to constrain rising property prices. They limited the amount banks can lend to the sector at the end of last year and are targeting leverage among the country’s vast developers. Individual cities have also introduced measures to curb prices.

In late 2020, PBoC restrictions on short-term liquidity led to a surge in interbank borrowing costs. The three-month Shanghai interbank benchmark more than doubled between May and November to more than 3 per cent — its highest level in two years — before it gradually declined.

Then China’s markets soared at the end of last year from a barrage of liquidity injections by the central bank, helping stocks and the yuan end 2020 on a high note. The benchmark CSI 300 Index has since risen to the highest level since 2008.

“The PBOC is unlikely to loosen its purse strings at least this week, which will make cross-month liquidity very tight,” said Xing Zhaopeng, an economist at Australia & New Zealand Banking Group.

In this context it is hardly a surprise then that after the warning and liquidity drain, Hong Kong’s Hang Seng index — which has been boosted this month by record-breaking daily volumes of buying by mainland investors — fell by more than 2.4%. Mainland China’s CSI 300 index of Shanghai- and Shenzhen-listed stocks dropped 2%.

The mood is still totally remaining intact in terms of its positivity,” said Andy Maynard, managing director at China Renaissance Securities. “Although we have a blip today . . . yesterday was kind of euphoric, last week was kind of euphoric.” But, he added, rising borrowing costs were unlikely to undermine positive momentum in China and other emerging markets.

“Where else in the world do you go? Where do you put that money?” he said. “For the global asset allocators who stay in equity, I don’t think you necessarily rush back to the dollar and you definitely are not touching Europe”.

And while the Chinese warning dented some overnight enthusiasm, S&P futures have since reversed and are trading near all time highs.