China’s first Mars mission could begin as early as next month. Tianwen-1 is expected to enter the red planet’s orbit in February, according to the China National Space Administration (CNSA).

On Sunday, CNSA released a statement that read Tianwen-1 has traveled more than 400 million km (249 million miles) from Earth since its launch in July.

The space probe is “functioning stably and is scheduled to slow down before entering Mars orbit in more than a month and preparing itself to land on the red planet.”

China’s Mars probe #Tianwen1 is expected to enter orbit around the Red Planet next month. After a journey of 470 million km, it’s expected to land on the planet’s surface in May. China also plans to launch the core module of a space station in 2021. pic.twitter.com/Yh4u6EYhD1

Tianwen-1 probe has three parts: an orbiter, a lander, and a rover. The sequence of the Mars’ mission will begin with orbiting, landing, then roving. 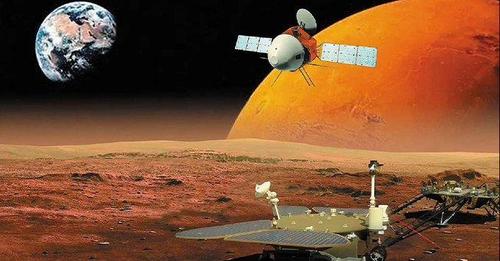 The orbit phase of the mission will be conducted for two to three months to decide on possible landing sites.

Once the landing site is chosen, the landing and rovering will begin sometime in May. Upon landing, the rover has 90 Martian days (about three months on Earth) to conduct scientific experiments.

A space competition with the US is unfolding as a race to send space probes to Mars, and the moon has been China’s latest mission.

In December, CNSA declared its “Chang’e-5 successfully landed on the near side of the moon.”

The probe’s mission included using a robotic arm from the lander to drill into the lunar surface to collect about four pounds of moon rocks, storing them in a container on the ascent module on top of the lander, before returning to Earth.

The US and Soviet Union competed for space supremacy in the 1960s and ’70s, as it now appears the ’20s will be between China and the US.