In what’s clearly a well-timed and glaring “message” not only aimed at Taiwan but especially at its Western backers amid this week’s continuing sanctions tit-for-tat with Beijing, Taiwan’s military is reporting on Friday the “largest ever” incursion by China’s air force.

While in the past months the PLA aerial patrols have grown bigger and more frequent – sometimes coming every week and often involving eight or a dozen or possibly even fifteen combined Chinese fighters and bombers – Friday’s incursion involved a record-setting twenty PLA military aircraft. This is by far the largest ever recorded, since Taipei began publicly releasing data on the incursions.

“Twenty Chinese military aircraft entered Taiwan’s air defense identification zone on Friday, in the largest incursion yet reported by the island’s defence ministry and marking a dramatic escalation of tension across the Taiwan Strait,” Reuters reports.

Such a large force is being described as “unusual” by Taiwan’s Defense Ministry. It confirmed the location of the aircraft and published select images in an official statement.

“The presence of so many Chinese combat aircraft on Friday’s mission – Taiwan said it was made up of four nuclear-capable H-6K bombers and 10 J-16 fighter jets, among others – was unusual and came as the island’s air force suspended all training missions after two fighter jet crashes this week,” Reuters continued.

Aside from this week’s sanctions escalation involving coordinated action of the US, UK, EU, and Canada on Monday over alleged ‘genocide’ and widespread human rights abuses in Xinjiang province, this latest bomber incursion comes a day after Taiwan’s defense chief admitted the island has initiated mass production of long-range missiles capable of striking mainland China. 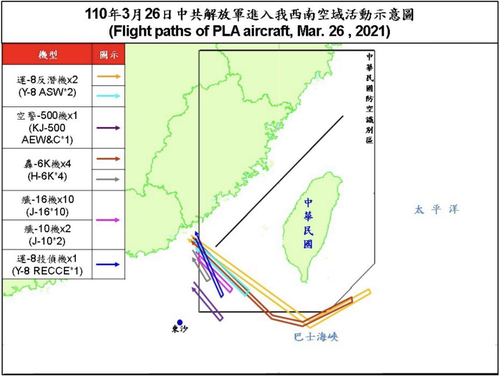 Friday’s largest ever recorded incursion is without doubt the mainland’s “answer” to Taiwan’s boasting over its missile developments and ambitions.

While Biden said Thursday during his first presidential press conference that he “doesn’t want confrontation” with China he’s done little in terms of rolling pack ‘confrontational’ Trump policies – but quite the opposition – he’s arguably actually increased the pressure.

This means there’s a great likelihood the Pentagon will send a destroyer through the contested Taiwan Strait once again in a bit of ‘counter-messaging’ as China ramps up its flights. And on up the escalation ladder we go…

JPMorgan: Investors Have Been Asking Questions About The Potential For Hyperinflation

OPEC On Verge Of Collapse After Saudis, UAE Refuse To Budge

Power Outside The Matrix: Cult of the Reality Builders