Hugo Boss has joined several other western clothing companies – notably H&M and Nike, which were virtually erased from the Chinese Internet late last week after saying they wouldn’t use cotton sourced from Xinjiang – in criticizing China’s record on human rights in the far-flung western region, and the company’s stock is paying for it Monday morning.

Boss shares tumbled in Frankfurt as Chinese celebrities criticized the brand over its stance on human rights in the country, ensnaring the German brand in a growing boycott of western firms. That boycott appeared to accelerate Monday morning as Chinese landlords started closing some of H&M’s stores, threatening its foothold in what has become the company’s fourth-biggest market. 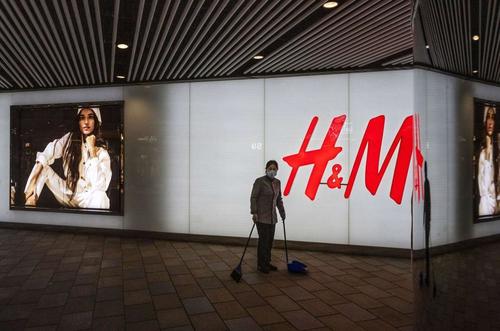 At one point, Boss shares were down more than 2%, H&M shares declined by a similar magnitude in Stockholm.

At least six stores in the lower-tier cities of Urumqi, Yinchuan, Changchun and Lianyungang have been shut down by the owners of the properties, according to mall operators in those areas who reportedly spoke to Bloomberg. In addition, local Chinese media have reported on more closures, with pictures showing H&M’s brand billboards being removed.

Li Yifeng, an actor and singer who has more than 60MM followers on his Weibo – a Chinese social media platform often compared with twitter – has ended all cooperation with Hugo Boss, according to a post on his agent’s Weibo account. Zhu Zhengting and Wang Linkai, both popular singers, will also stop working with the German firm, according to similar posts from their agents.

Western clothing companies have all found themselves in an uncomfortable position. On the one hand, the US and EU, which recently slapped new human rights sanctions on China, have criticized the CCP for imprisoning more than 1MM ethnic Uyghers in concentration camps. On the other, Beijing has made clear that firms hoping to sell clothes in China can either use cotton from Xinjiang, or risk a public “boycott”.

When confronted about the cotton issue at a press conference last week, Foreign Ministry spokeswoman Hua Chunying insisted nearly half the production in the region is “mechanized”, while also slamming America over its own history of slavery. “This was in the US when Black slaves were forced to pick cotton in the fields,” she said.

Hugo Boss initially appeared to try to appease the CCP by posting on its Weibo account last week that it would “continue to purchase and support Xinjiang cotton.” However, a spokeswoman for the company now claims that comment was unauthorized and has now been deleted.

In a separate statement currently posted to its website, Hugo Boss said the company does not tolerate forced labor and insists that its global suppliers follow suit. The company “has not procured any goods originating in the Xinjiang region from direct suppliers.”

Circling back to H&M, mall operators said the closures were ordered by landlords who wanted to punish H&M for showing “disrespect” to China. As Bloomberg put it, H&M appeared to suffer the brunt of the fallout after the statement was called out by the Communist Youth League and the People’s Liberation Army. In addition to the closures, As we have reported, H&M outlets have vanished on Apple Maps and Baidu Maps searches, making it hard for Chinese consumers to locate stores, and it’s been removed from Chinese e-commerce platforms. It’s unclear how long the closures will last, and analysts warned that it could significantly impact the company’s second-quarter sales.

Other brands, including Inditex’s Zara, are still weighing whether to use Xinjiang cotton, or not.

“Just Get Back To Living”: Bill Maher Declares Pandemic Over, Says “You Shouldn’t Have To Wear Masks”