Chinese stocks fell, starting the week off on the back foot despite solid January-February economic data which showed surging industrial production and retail sales growth stronger than market expectations, although weaker-than-expected investment growth and higher unemployment point to an uneven recovery (Goldman noted that it expects the strength in export growth to continue supporting manufacturing activity, and services and consumption should recover further as the local outbreak of coronavirus was brought under control).

Here are the key numbers: 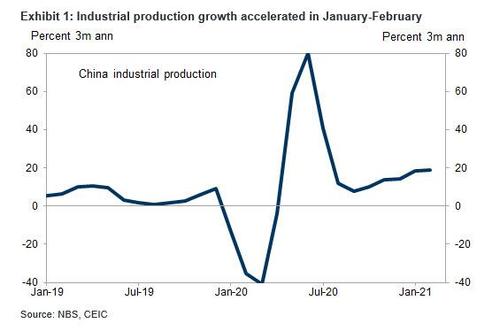 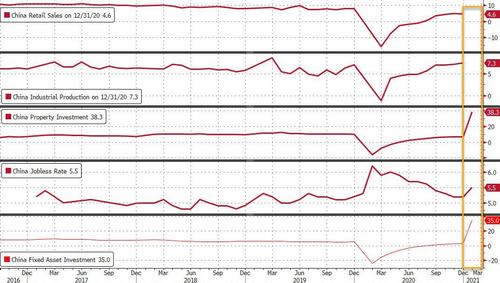 Some further observations on the data from Goldman:

1. Year-over-year growth in activity data accelerated materially in January-February on the back of the very low base last year. IP increased 35.1% yoy on the back of the strength in export growth. Production of computers/electronics, electrical machinery and autos were the major drivers of IP acceleration in January-February vs December (Exhibit 2). 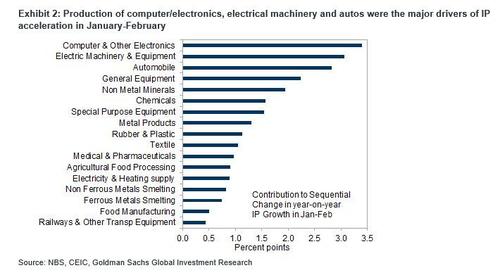 In sum, China’s economic activity data showed strong acceleration in year-over-year terms on a very favorable base effect. In sequential terms, industrial production remained strong in the first two months of the year, but retail sales and fixed investment appeared to still be lagging behind. Looking ahead, Goldman expect the strength in export growth to continue supporting manufacturing activity, and services and consumption should recover further as the local outbreak of coronavirus was brought under control. Based on the historical relationship, the January-February IP and service output index suggest some upside risk to Goldman’s Q1 GDP forecast of 17.3% yoy.

In response to the data, China’s CSI 300 initially rebounded from an early drop only to decline again, sliding almost 2%. The ChiNext Index tumbled more than 3.5%. The Hang Seng Index gained 0.6%, propelled by Xiaomi after a U.S. court blocked the Defense Department from restricting American investment in the Chinese smartphone company. Tencent dragged on the index after a report on China’s increased scrutiny of its finance-related businesses. 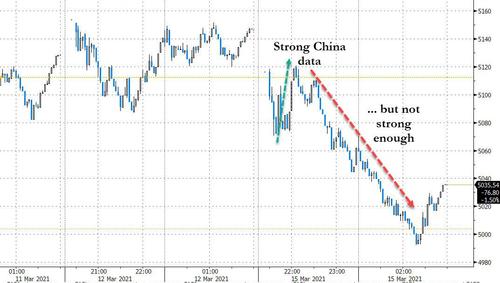 It’s The Lockdown Trade That Keeps On Delivering