Thirty-four tech firms attended an administrative and supervisory meeting held on Tuesday. They were given approximately one month to “rectify their monopolistic acts and tax-related irregularities or violations” after an internal government probe. These firms were told they had about a month to correct any practices that “harms competition.

The meeting also outlined how these tech firms create unfair competition in the economy that prevents innovation and development and harms business operators and consumers’ interests. It was also noted at the meeting the tech firms must change their ways to conform to national interests

“Following the decision and penalties levied by SAMR’s anti-monopoly investigation of BABA, we think the street has more color about the latest updates on Ant Group,” Jefferies said in a note published Monday.

Alibaba, which owns about 33% of Ant Group, operates a popular mobile payments app called Alipay. In November, regulators suspended Ant’s IPO due to changes in the financial technology regulatory environment.

Both Alibaba and Ant’s restructuring plans, forced upon by regulators, are part of Beijing’s much broader push to reign in the power of the country’s largest technology companies.

One of the practices that regulators are not happy about is tech companies forcing merchants to “choose one from two platforms.” They call it an abuse of market dominance, along with other noncompliance and tax-related violations. Regulators want these tech companies to rectify these violations in the near term. Also, business operators are given a limited choice of one from two platforms is an “unruly and unchecked expansion of capital, blatantly breaching market competition order and hampering innovative development,” said Global Times.

The meeting outlined that tech companies should strictly comply with government demands to restructure their business practices and place national interest first.

Specially, the regulators asked the platform companies to stop “unruly expansion of capital” to ensure economic and social safety, to stop monopolistic moves that harm fair competition, to stop strangling competitors with technologies that harm innovation, and to stop abuse of rules and algorithms and to ensure every market player’s legitimate rights and interests.

The regulators ordered platform companies to review all internal processes within a month and thoroughly rectify monopolistic actions that harm fair competition.

Meanwhile, the regulators will undertake inspections to ferret out any irregularities or violation of market rules.

Strengthening management of the platform business doesn’t mean that the country’s attitude of supporting and encouraging platform economy will be changed, but the move will serve as a wakeup call for the platforms to always help promote fair competition, to be innovative, and to serve the society. – Global Times 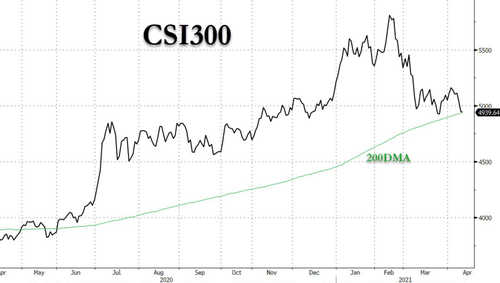 Over the last several months, Beijing has been getting tougher on big tech as part of Xi’s shakedown of millionaire oligarchs like Jack and Pony Ma, and traders expect the Chinese president to expand his crackdown in the coming weeks and months.

Capitol Police Order Lockdown of Capitol, House and Senate Buildings, Urge Those Outside to Seek Shelter

WATCH: Bioethics and the New Eugenics