The ongoing decline in China’s credit impulse, which we have discussed extensively here in recent weeks, just made its latest appearance and the market was not happy.

The PBOC withdrew a net 40.5 billion yuan of one-year funds in the first quarter, as policy makers address the twin challenge of a buildup in leverage while supporting the economic recovery from the pandemic. The tightening ricocheted through markets, with the main equity gauge falling from the highest in more than a decade while the benchmark money-market rate jumped to a three-year high in February. 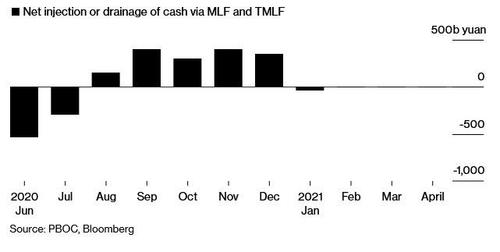 In kneejerk response, the CSI 300 Index pared an earlier 1.6% decline to close 0.6% lower, just above its 200-day moving average.  Banks fell, with the CSI 300 Financial Index declining the most in three weeks. 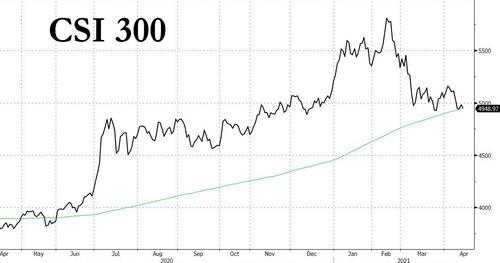 The CSI 300 Index has lost 15% since climbing to a 13-year high in February, amid investor concerns about tighter monetary policy as the economy recovers. The “PBOC’s operation confirmed the relative pessimistic expectations,” said Wang Chen, partner at XuFunds Investment Management Co., noting that it had a negative impact on the market.

And while money markets barely reacted, unlike the last time China’s tightened financial conitions, Bloomberg notes that the decline in stocks showed how equity traders are struggling to come to terms with plans by Chinese policy makers to gradually wind back pandemic-fueled stimulus: “The test for the economy will come in the weeks ahead as banks need to help corporate clients pay taxes, and as sales of government bonds are forecast to accelerate.”

“The expectation in the market is that the central bank will gradually tighten its liquidity as it seeks policy normalization after the pandemic,” said Zhang Gang, a strategist at Central China Securities Co.

He added that authorities will probably add more cash via open-market operations, noting that “It looks like PBOC is phasing out TMLF as they rely more on re-lending and re-discount to support the demand from smaller companies, MLF rollover is actually higher.”

Which is odd since Chinese policy makers have always been cautious about rapid increases in leverage. In 2017, the PBOC guided money rates higher, driving the benchmark 10-year yield to a three-year high, after low borrowing costs spurred a surge in property prices. The government has said it aims to keep macro leverage “basically stable” in 2021, after the country’s debt-to-GDP ratio soared to a record 279% late last year following a series of stimulus measures deployed to blunt the virus impact.

The central bank’s operation Thursday “is a bit disappointing to the bond market and funding costs will rise,” said Xing Zhaopeng, senior China strategist at Australia & New Zealand Banking Group Ltd. in Shanghai. The PBOC is likely to add more cash through seven-day reverse-repurchase agreements to plug the liquidity gap as the tax payment season starts later this month, he said.

That said, as Bloomberg notes, banks aren’t suffering from a severe shortage in cash. The 7-Dau repurchase rate is close to its average level for the past year, and the 10-year sovereign bond yield is near its lowest level in more than two months. Of the analysts surveyed by Bloomberg, two had forecast a neutral stance from the PBOC, with the third seeing a gross injection of 150 billion yuan to 200 billion yuan.

The PBOC looks to be phasing out the usage of targeted loans, and is instead focusing on other policy tools to support small firms, according to Tommy Xie, head of Greater China research at Oversea-Chinese Banking Corp. in Singapore.

US Requires All UK Travelers To Test Negative For COVID, CDC Rules