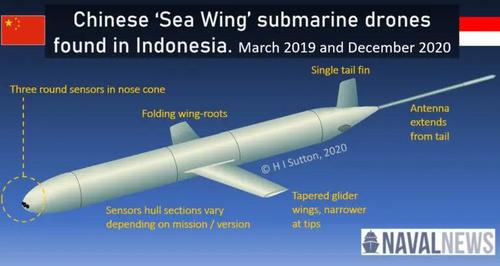 The drone was discovered near Selayar Island in the South Sulawes, far away from China’s adjacent waters. The location is close to two potential routes between the South China Sea and the Indian Ocean, according to Naval News. These routes, the Sunda Strait and Lombok Strait, “may be important in wartime” and “Intelligence gathered by the drone may be valuable to the Chinese Navy if their submarines intend to use these straits” according to the report. 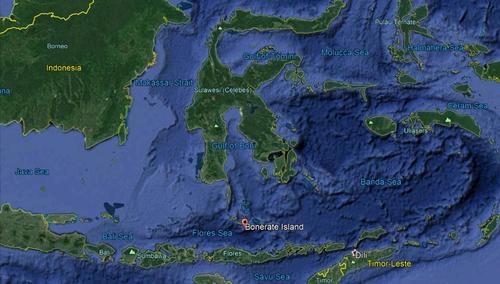 The discovered object is a type of drone known as a glider. These are unpowered and use something called variable-buoyancy propulsion. This involves inflating and deflating a balloon-like device filled with pressurized oil. This causes them to sink before rising to the surface again. As they do so they travel along, aided by “wings”, gathering data on the ocean environment.

Indonesian based security & defense poster @Jatosint was quick to post the find on Twitter, and make the connection to the Chinese-made Sea Wing glider. Note that the device is upside down in the photos.

A fisherman in Selayar Island, South Sulawesi, has found a UUV:

Very similar to China’s ‘Sea Wing’ UUV, which, if it’s true, raised many questions especially how it managed to be found deep inside our territory pic.twitter.com/RAiX8Xw2BK

The drone collects such data as temperature, turbidity, salinity, chlorophyll and oxygen levels. While this data may sound innocuous and it is often used for scientific research, it can also be extremely valuable to naval planners. Especially supporting submarine operations. The better a navy knows the waters, the better it is able to hide its attack subs.

The US, France and other countries build and operate similar gliders. However, key characteristics of the Chinese type, which are not found on other similar underwater glides, are present. The nose cone has three circular sensor windows with the central one larger than the outer two. The wings have a folding mechanism and the antenna extends directly out of the center of the tail cone. The vertical stabilizer, like a tail fin, is seen underneath.

Sea Wing gliders are known to be launched by China’s specialist survey ships. In December 2019 the survey ship Xiangyanghong 06 launched around 12 of the drones into the Eastern Indian Ocean. The one found may be one of these, but it seems unlikely given the ocean currents.

Another Sea Wing glider was found by Indonesian fishermen in March 2019. This was in the Riau Islands, much closer to the South China Sea. The exact variant of Sea Wing was different, but the craft was very similar. However this is enough to suggest that they were deployed at different times and likely in different places. Additionally, camera-like sensors were apparently still operating when it was recovered. This suggests that it was deployed more decently.

Where the glider was originally deployed, and what it was doing, remains unclear. But these craft can provide valuable military intelligence.

China previously protested when it found a similar US Navy glider in international waters near its coast. On December 15, 2016 a Chinese ship plucked a US Navy LBS-G ( Littoral Battlespace Sensing-Glider) out of the South China Sea. The glider was in the process of being recovered by USNS Bowditch. The drone was only returned after the incident escalated.

This particular incident is unlikely to escalate in a similar fashion, but it does draw attention to China’s increasingly assertive maritime activities in the South China Sea and close to major naval lanes. These gliders may serve as evidence that China is analyzing  potential submarine routes into the Indian Ocean through Indonesian waters.