Billions of cicadas, tiny winged insects that have spent nearly two decades underground, are set to emerge this year across the easter half of the U.S, according to Newsweek.

Periodical cicadas — unlike annual cicadas — emerge every 17 or so years — and that cycle of reemerging is this spring.

A map created by Newsweek/Statista, citing data from Cicada Mania, shows the states where Brood 10 cicadas will emerge from the ground after a 17-year-long sleep. The critters were last seen in 2004.

From May to June, cicadas will be seen in Virginia, North Carolina, Georgia, Tennessee, Kentucky, Illinois, Indiana, Michigan, and Ohio. Mid-Atlantic and Northeast states will also see billions of bugs. 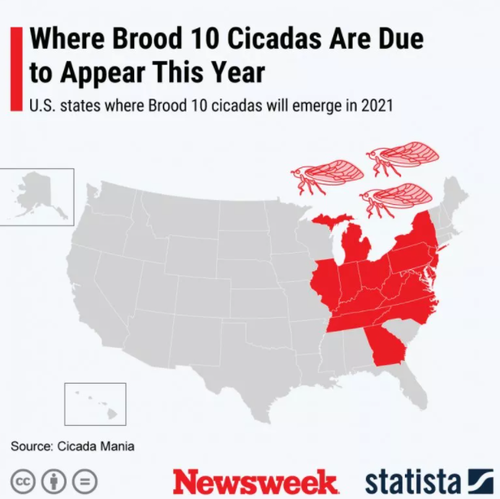 Cicadas are very distinguished by their muscular bodies, broadheads, clear wings, and massive eyes. The insects are harmless to humans but are considered a nuisance.

According to National Graphic, cicadas — like most insects — are a good protein source and have about the same amount per pound as red meat.

Billions of tiny insects could be an incredible source of protein for struggling Americans this year as food insecurity has become a problem for tens of millions of folks.

In 2004, PBS News spoke with entomologist Mike Raupp of the University of Maryland about cicadas.

Learn how to cook cicadas.

We noted, the food industry is set to take a giant leap forward towards sustainability, with the world’s largest insect food processing plant expected to be built in central Illinois.

While millions of Americans have been thrown into poverty due to the economic downturn, Albert Edwards, an investment strategist at Societe Generale SA, recently published a report on the dangers of soaring food inflation.

Edwards, quoting the latest figures from the U.N.’s Food and Agriculture Organization (FAO), showed food prices of oilseeds, dairy products, meat, and sugar are on the rise.

As shown below, the FAO food index hit a sixth-year high in November. 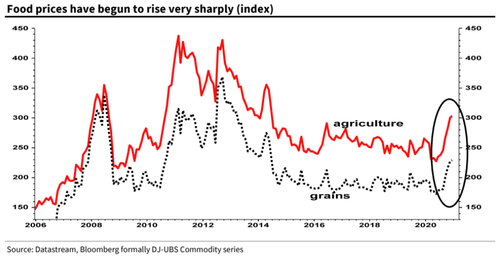 Maybe this year, with millions of Americans suffering from food insecurity, financial devastation, and soaring food inflation due to the economic downturn, the working-poor should at least examine the possibilities of harvesting cicadas for breakfast, lunch, and dinner as a free source of protein.