If you needed proof that short sellers were scrambling to update their business models after last week’s chaos, look no further than Citron Research.

Citron’s Andrew Left, as we noted last week, said he was discontinuing short research in favor of long-biased work. And he wasted no time getting after his “new” model by sending shares of CVLB soaring on Monday. 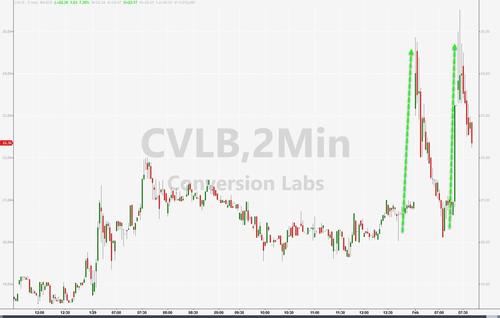 First thing Monday morning Citron was out with its first long call, noting that shares of Conversion Labs should be at $140 per share. Citron posted a basic financial model and called the company’s newest presentation “compelling”.

$CVLB same biz as $HIMS. $CVLB would be at $140 at $HIMS multiple AND $CVLB growing 160% vs $HIMS 30% No need to editorialize..here is the Telemedicine chart. Citron long $CVLB. New presentation compelling https://t.co/1w1K1Xyh4j pic.twitter.com/DywUVWifiQ

Recall, last week we documented when Citron’s Left said he was “discontinuing” short reports. Left announced in a video on Friday morning:

“Citron Research discontinues short selling research. After 20 years of publishing Citron will no longer publish ‘short reports’. We will focus on giving long side multibagger opportunities for individual investors”

“For the first 15 years of existence,” Left said, “no financial news outlets wanted to even cover that we existed.”

“We uncovered more fraud than any non-governmental agency out there,” Left said in his video. “We have done this whole thing without hiding from lawsuits and without publishing anonymously,” he continued.

After 20 years, we’ve noticed that “we’ve actually become the establishment,” he says. “It has completely, now, lost its focus”.

You can watch his full announcement here: