In a conversation that sounds like two demented QAnon members, Hillary Clinton and Nancy Pelosi suggested that President Trump instigated the Capitol siege at the behest of Vladimir Putin. 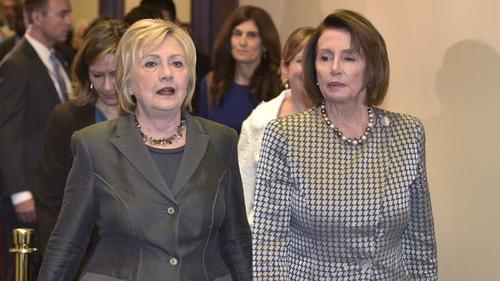 Two-time failed Presidential candidate Hillary wheeled out Pelosi on her “podcast”, and the two soon began to spout their familiar conspiracy theories.

“We learned a lot about our system of government over the last four years with a president who disdains democracy and, as you have said numerous times, has other agendas,” Clinton blathered.

“What they all are, I don’t think we yet know. I hope historically we will find out who he’s beholden to, who pulls his strings,” she continued, adding “I would love to see his phone records to see whether he was talking to Putin the day that the insurgents invaded our Capitol.”

She then said that Trump’s “enablers,” “accomplices,” and “cult members” were behind the rioting.

Is Twitter going to include Russiagate in its new crackdown on conspiracy theories? @Jack?

Clinton asked Pelosi “Do you think we need a 9/11-type commission to investigate and report everything that they can pull together and explain what happened?”

Pelosi responded “I do,” and claimed she told Trump that “With you, Mr. President, all roads lead to Putin.”

“And these people, unbeknownst to them, maybe, are Putin puppets. They were doing Putin’s business when they did that at the incitement of an insurrection by the president of the United States,” Pelosi proclaimed, adding

“So yes, we should have a 9/11 commission, and there is strong support in the Congress to do that.”

So another three year waste of time and money chasing some Putin conspiracy?

Remember when Mueller spent 18 months and millions of dollars armed with a team of prosecutors and subpoena power, then closed his investigation after arresting *zero* Americans for conspiring with Russia?

Let’s do it again! Anything to distract from how rotted neoliberalism is.

LOL. In that above clip, Hillary Clinton explicitly suggests that Trump was plotting with Putin on the day of the Capitol Riots, as if Putin directed it.

These people are the *last* ones with any moral standing to rant about conspiracy theories & disinformation. 🇷🇺🇷🇺🇷🇺🇷🇺🇷🇺🇷🇺

After the break: we’ll discuss with our all-FBI panel whether more censorship power is needed to prevent conspiracy theories and disinformation from spreading.

And then, our all-CIA panel asks: did Putin use a pee-pee tape to control the US, and did he order the Capitol riot??

Hillary, can you show me on the doll were Trump hurt you?

China Reports Stronger Than Expected GDP, Is Only Major Economy To Grow In 2020