The procedure involves inserting a probe some two inches into the rectum and rotating it there repeatedly. In this video you can watch a Chinese “scientist” demonstrating on a dummy how specimen collection is carried out. It is a sickening sight. 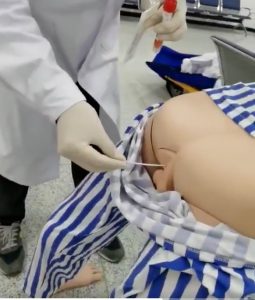 Knowing how our government has behaved in this crisis so far, we can be fairly confident that this test will be soon imported here.

This is how Human Rights Watch views this practice:

Many of those forced to submit to this procedure have been severely impacted by the experience:

The Reuters story concludes with something that should make us all shudder:

“Stool tests may be more effective than respiratory tests in identifying COVID-19 infections in children and infants since they carry a higher viral load in their stool than adults, researchers at the Chinese University of Hong Kong (CUHK) had said in a paper published last year.”

According to these “scientists,” this procedure is especially well-suited for young children. But to subject children to this makes no sense from a medical point of view. The travesty of probing children’s rectums for evidence of a respiratory disease could not be more glaring. If they really wanted to find out whether children had COVID or any other communicable illness of the respiratory tract, they would swab their mouths, not their bottoms. This is how it has always been done.

Normal children are at virtually zero risk from COVID. It is almost unheard of for young people under 18 years of age to die of this disease. Your healthy child is less likely to die of COVID than to be killed by lightning. Furthermore, children are not known to be particularly potent spreaders of the virus. Thus, there is no need to subject them to indiscriminate blanket testing, much less to testing protocols involving such a drastic and unnecessary procedure.

Populations that have been terrified and browbeaten into allowing the state to do this will allow government to do anything. What can be worse than forced sodomization of children? In a move whose ulterior motive could not be more transparent, governments will now seek to legitimize this outrage under the cover of medical necessity.

If state agents are allowed to insert probes under false pretenses into children’s rectums, there will be no limit to what they can do. Parents who agree to let the state do this to their own children will then agree to anything.

And what about the danger of child abuse? The scope and potential for molestation inherent in this practice is immense. This protocol is an invitation for abuse on a wide scale, making school children easy prey for pedophiles.

Do we need to be potentially creating more homosexual people? Given all the negatives and dangers associated with this lifestyle is such a move socially desirable?

Above all, the totalitarians want to teach you and your child this lesson: whatever the state wishes to perpetrate upon your person – no matter how obviously gratuitous or humiliating – you must pull down your pants, bend over and accept it.