One-third of people who have had COVID-19 suffer some type of neurological or psychiatric disorder within six months of testing positive for the virus, with one-in-eight receiving their first such diagnosis over the same period, according to a new analysis from the department of psychiatry at Oxford which looked at health records from 236,379 patients. 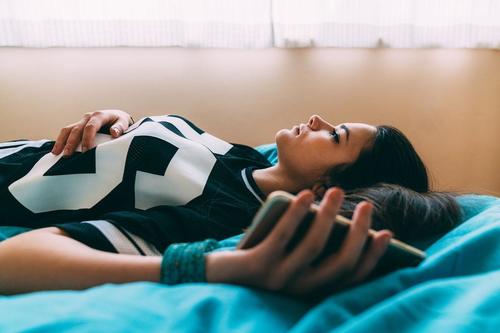 The analysis, which has yet to be peer-reviewed, compared COVID-19 survivors to a group diagnosed with influenza, and another cohort diagnosed with respiratory tract infections between January 20 and December 13, 2020, according to The Guardian.

Led by Oxford’s Dr. Max Taquet, the analysis accounted for known risk factors such as age, sex, race, underlying physical and mental conditions and socio-economic deprivation. It builds upon prior research from Taquet which revealed that nearly 20% of those with COVID-19 are diagnosed with a psychiatric disorder within three months of testing positive, with 5.8% of those being their first such diagnosis. 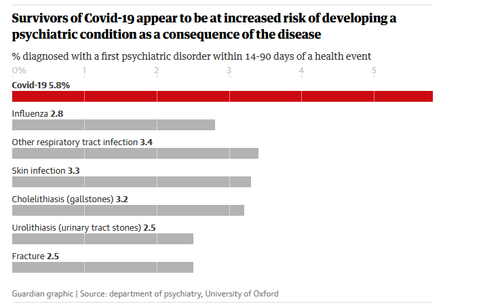 That said, COVID and its ensuing lockdowns have been tough on everyone – with the American Psychiatric Association (APA) reporting last June that there’s been an increase in psychiatric disorders during the pandemic. Early on in the outbreak, both the New York Times and Washington Post noted a rise in anxiety and depression – with one-third of Americans showing signs by late May.

How long might these disorders last? Taquet doesn’t know. “I don’t think we have an answer to that question yet,” he told The Guardian, adding “For diagnoses like a stroke or an intracranial bleed, the risk does tend to decrease quite dramatically within six months … but for a few neurological and psychiatric diagnoses we don’t have the answer about when it’s going to stop.”

The likelihood that a proportion of patients who were given psychiatric or neurological diagnosis after Covid-19 had underlying illness that just hadn’t been diagnosed previously, could not be entirely ruled out – but the analysis indicated that this was not the case, he suggested.

Patients with influenza and other respiratory infections saw their doctor more often than patients with Covid-19, he said, adding that diagnoses such as an intracranial bleed or stroke could not be hidden for long and were usually diagnosed in emergency rooms.

Although the study does not prove that Covid-19 is directly behind these psychiatric and neurological conditions, research that suggests the virus can have an impact on the brain and the central nervous system is emerging. –The Guardian

One caveat – ti is unknown whether a person’s first entry of a diagnosis into the electronic database represents their first occurrence of the condition. Still, the findings are of interest to the medical community.

“I think particularly this raises a few disorders up the list of interests, particularly dementia and psychosis … and pushes a few a bit further down the list of potential importance, including Guillain-Barré syndrome,” said Dr. Tom Nicholson, an unaffiliated psychiatrist and clinical lecturer at King’s College hospital, who added that the findings would help guide researchers towards which neurological and psychiatric complications require further and careful study.

If Isaac Newton Can Be Cancelled, No On Is Safe

Dozens Of Chinese-Owned Factories Have Been Torched By Myanmar Protesters