While the biggest COVID-19 story on Monday was the new CDC director’s unhinged warning about her feelings of “impending doom” during a virtual house briefing, it’s worth noting that the pace of new COVID cases globally has been accelerating for five weeks as a new wave.

First off, the CDC has extended the pandemic eviction moratorium, set to expire Wednesday, until June 30. The news follows reports that Moderna has now shipped another 100MM COVID jabs to the US government. The news coincides with the CDC’s report that the pace of US vaccinations has exceeded 3MM doses per day for the past three days. The US is nearing 145MM COVID vaccinations, nearly 5x the number of confirmed COVID cases in the US (just shy of 30.3MM).

Outside the US and Europe, India and Brazil (the new global leader in new virus cases and virus-linked deaths) have drawn attention for their resurgent outbreaks, though the state of the two country’s responses is very, very different.

On Monday, India reported its has reported its worst single-day increase in COVID-19 cases since October, taking the tally to more than 12MM for the first time ever.

A total of 68,020 new coronavirus cases were reported in the last 24 hours, the health ministry said. It was the highest daily rise since Oct. 11. Daily deaths rose by 291 on Monday and the virus has so far killed 161,843 people in the country.

India has been reporting a spike in cases – above the 60,000 mark – for three consecutive days, though Monday’s rise was still below September’s peak of more than 90,000 cases a day. Sunday’s numbers also marked the sixth consecutive day that the country has reported a new record high for 2021.

India’s worst affected state, Maharashtra, is considering imposing a strict lockdown this week and has already tightened travel restrictions and imposed night curfew in a bid to put a lid on rising cases of infections. 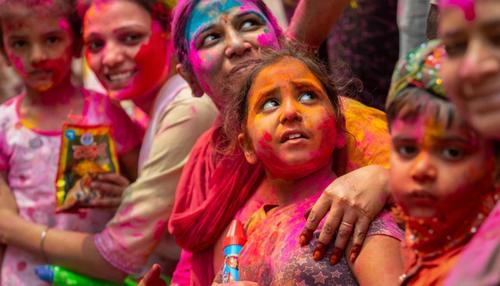 Threatening to make matters worse, Hindus across India are celebrating Holi, even as states in the country have tried to restrict gatherings, citing concerns that they could stoke even more viral spread.

In Europe, as German Chancellor Angela Merkel threatens to impose new restrictions like a curfew, the Slovenian government moved to reinstate coronavirus restrictions as infections and hospitalizations rise.

“We’re in a race against time,” said Prime Minister Janez Jansa during a press conference on Sunday, announcing that public life in the country will essentially be suspended between April 1 and 12.

The UK has of course presided over a much more successful vaccine-rollout program than Europe, and as a result, people in England are now allowed to meet outdoors in groups of up to six or two households (with social distancing), as the country officially started easing COVID-related restrictions on Monday. The country has been in full national lockdown since Jan. 4, after a mutant COVID strain believed to be more infectious was isolated in the southeastern part of the country.

While weddings can now continue, they are still only allowed to a maximum of six attendees.

“I know how much people have missed the camaraderie and competition of organized sport, and how difficult it has been to restrict physical activities — especially for children,” Johnson said.

“I know many will welcome the increased social contact, with groups of 6 or two households now also able to meet outdoors,” he added.

While it is the most significant easing in England since schools returned on March 8, many businesses remain shuttered.