Now that the “huge gamma strike” at 3800 has been blown away, the next big Call Wall for the S&P500 is at 3900 with SpotGamma noting that “a very large Combo resistance bar at 3905.” However, now that momentum is again solidly higher and markets have pushed into the 3850-3900 range, positive gamma has increased in the S&P complex to a fairly robust $1.5BN, meaning that the higher stocks ramp, the more buying interest there will be as dealers rush to delta hedge.

As SpotGamma further notes, such a high gamma reading is a rare high for the post-Covid era as indicated below (orange dots last 30 days).

Picking up on this discussion of the latest moves (higher) in the “greeks”, Nomura’s Charlie McElligott writes this morning that “Gamma Gravity is building into the higher SPX strikes in SPX / SPY consolidated options, as funds rush to slap back on upside exposure after the VaR-event of the prior week, which forced mechanical deleveraging in gross- and net- and effectively got them “de facto short the market” into then what was then an inevitable rally (after there was no systemic risk spillover).”

Similar to SpotGamma, Charlie then notes that there was a significant jump in gamma at what were already the two largest SPX / SPY consolidated options strikes, from $4.38B yesterday morning to $6.55B as of today in the 3900 strike line (similar to the SG estimated increase of $1.5BN) while the gamma at 3,850 has also increased from$3.85BN to $5.56BN today, so it’s not surprising that we see ES trade exactly at the midpoint of 3,875, “as it looks like people added options too as we rallied up to these strikes, with nearly all of this gamma change coming in expirations btwn 2/08/21 and 07/30/21.”

Charted below, this can be seen in both SPX gamma and delta ranks “leaping day-over-day accordingly as we rallied” with Nomura calculating that gamma spiked from the 45th %ile yday, and is exploding higher now to 85th %ile today, while delta also went from 68th %ile yday to today’s 83rd %ile.

This, to Charlie, “is a big deal, because… until the past day or two was almost no “crash up” priced-in on the index level, with what had been just single-digit %ile rank in 1m, 3m and 6m upside Call Skew in SPX.” Instead, besides the occasional meltup single stock (GME of course), we were only seeing “crash up” bid at the thematic ETF level in “reflation” expressions/hedges.

But now, after this spike in gamma amid apparent “upside grabbing,” we are finally seeing SPX upside Call Skew “register a pulse, as 1m SPX 1m jumps from just 0.3%ile after last Friday to today’s 43.7%ile”, according to McElligott who also notes that “conversely all the bid has been (and remains) in the “crash down” stuff in both SPX Index and VIX, with still 91st %ile 1m / 92nd %ile 3m / 96th %ile 6m downside Put Skew in SPX.”

Ultimately, the gamma repricing is just a matter of “too much demand for iVol on actual hedging needs (especially with mounting concerns that in a reflationary macro regime that USTs no longer work as your hedge)….versus no real source of supply in iVol”, something Nomura noted recently… 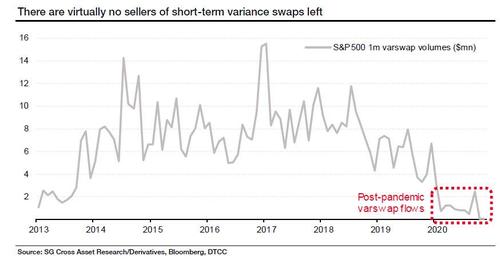 What does all of the above mean in English? It means that the same dealer call/gamma exposure that helped GME soar in January, and which SoftBank used to spark a huge market meltup last August, is making a bold return to the S&P itself which also means that it is only a matter of time before the market rises above 4,000.

Failure To Contain Big Tech Is The Biggest Failure Of 2020

Plus Ça Change: A French Lesson In Monetary Debauchery