So much for President Biden’s call for “unity” as a mob of Antifa rioters (who as a reminder do not exist in reality as Biden previously noted that is “just an idea”) ran wild through the Pearl District of Portland on Saturday night, vandalizing buildings and spray painting anti-police messages.

Portland Police announced this message over the loudspeaker to rioters:

“To those marching in the Pearl District: Officers have observed and community members have reported members of this group have damaged buildings in the Pearl District. Immediately stop participating in criminal behavior including damaging property. Failure to adhere to this order may subject perpetrators to detention, citation, arrest, or use of crowd control agents, including, but not limited to, tear gas and/or impact weapons. Immediately stop participating in criminal activity.”

Police were in short supply last night due to “multiple shooting incidents across the city.” A dwindling police force is no thanks to the social justice warriors in the Portland City Council, who defunded the police budget by $15 million, eliminating 84 positions.

Further, police have been restricted on the type of non-lethal weapons they can use. Tear gas is currently banned in the metro area. So while multiple shootings constrained officers – videos and images of the rioters, uploaded to Twitter last night, show numerous buildings vandalized, including a Chipotle, Starbucks, and Safeway.

Rioters can be heard smashing windows. Some tagged buildings with the acronym “ACAB,” which means: “all cops are bastards.”

Overnight, #antifa destroyed numerous businesses in Portland’s Pearl District as part of a pre-planned riot. People were inside this Chipotle at 1201 NW Lovejoy when antifa attacked the building. Watch this video with sound on. #PortlandRiots pic.twitter.com/2LfMAaSrjy

The mob targeted a Starbucks. 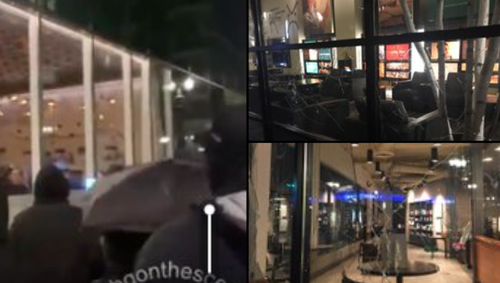 Person associated with the BLM-antifa protest group fights a random woman at the Portland riot. Apparently the woman (in lighter clothing) didn’t approve of their violence on the streets. #PortlandRiots pic.twitter.com/RHitFtN5HX

A mob of #antifa destroyed business windows & smashed up cars in the Pearl District of Portland overnight in another pre-planned riot. #PortlandRiots pic.twitter.com/Gm4qJBWxdd

A police vehicle was destroyed.

#Antifa destroyed a vehicle at their Portland riot in the Pearl District overnight. #PortlandRiots pic.twitter.com/U9vUXyGHnB

“I just think you guys are funny, like why are you yelling at the police?” A tourist confronts some of the group along the march route #Portland #Oregon #PortlandProtests pic.twitter.com/gAqqUzc7nO

Police didn’t give a figure on the mob’s size, but it appears dozens showed up for the destructive march.

After two hours of chaos, police only made two arrests before the crowd dispersed before midnight.

Darell Kimberlin, 31, was issued a criminal citation for criminal mischief in the first degree. A juvenile was also arrested for interfering with an officer. The 17-year old (unnamed) was released to his/her parents.

Last month, an Antifa mob attacked an ICE building in South Portland. Even the mayor of the city has turned on the radical left group, calling them “lawless anarchists.”

Portland is also struggling with socio-economic turmoil. While tens of thousands remain unemployed due to the virus downturn, violent crime is surging in the left-leaning city.

Since last summer, rioters have inflicted millions of dollars in damage across the metro area – with no end in sight nor “unity” – this kind of chaos will only increase under a Biden administration.

What’s the government’s solution to keep these crazed leftists off the streets? More helicopter money?