Once a year, Harley Bassman, Morgan Stanley’s iconic “Convexity Maven” and the person who created the MOVE index also known the VIX for bonds, publishes a list of Investments that he thinks will do well over the intermediate horizon – the next two to five years. As Bassman explains, “these are NOT meant to be nips to blips RV trades, but rather longer-term notions that capitalize upon either my strongly held themes or the trembling hands of Sharpe Ratio focused portfolio managers.”

But before getting into the details of his forecast, Bassman does a quick walkthru the year that is almost over, where the defining feature – for capital markets – was the COVID pandemic “prompted the shot-gun marriage of the Federal Reserve’s (FED) Monetary bazookas of a Zero Interest Rate Policy and Quantitative Easing to the Federal Government’s ~$2Tn CAREs Fiscal relief program” to bring us the first official instance of helicopter money and MMT.

As repeatedly discussed on this website, Bassman notes that underpinning the $3.0Tn of new Treasury supply this year, necessary to fund the Treasury’s spending spree, was the FED’s promise to hold their overnight rate at effectively zero until at least 2023, as well as to monetize all net issuance. And according to the MOVE creator, “this is the fulcrum upon which I balance most of the investment notions to follow.” As he explains, “financial repression by the FED has pushed down interest rates across the risk and maturity spectrum.” And while the new fusion policy not reduced Credit risk, it has stripped away the incremental yield required to offset the inevitable losses from default.  Thus, the man who almost singlehandedly built out Merrill’s mortgage desk prefers to take “leverage risk” over“credit risk.”

In a nutshell, as the former Merrill bond derivatives guru puts it “the FED wants us to borrow, so that is exactly what I will do.“

With that in mind, here are Bassman’s top seven intermediate horizon trades:

I would not call 3650 on the SPX cheap, nor is it even fair, but it is not rich relative to a ten-year Treasury rate of 0.90%, or a Junk bond rate of 4.90%. And the truth of the matter is that US stocks are reasonably priced, once one pulls out the six FAAANM stocks. 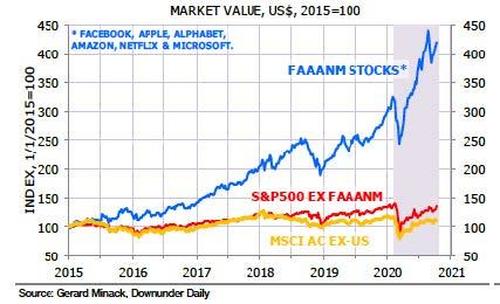 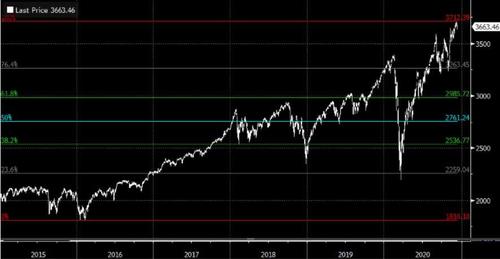 The US Government is likely to enact a $916bn Fiscal package (4.3% of GDP) to be funded by debt effectively sold to the FED. For all intents and purposes, this is the (un)official kick-off of Modern Monetary Theory (MMT). If the vaccines lead to herd immunity by mid-summer, consumer spending will explode.

But the more interesting concept here is that one is implicitly borrowing money at 0.20% for two years, the rate embedded into the option pricing model.

This trade is best suited for investors who are already long core US equities who may want to take profits at the current low Capital Gain tax rate and replace a long position with this option package. While one gives up the first 12.3% of an advance, in exchange one is protected against the first 24.7% decline.

The put is struck at 275, just below the Fibonacci 50% retracement of the entire five-year bull run; this can be a sticky level of solid support. Using 2018 actual earnings of $161.93, this strike would mark a P/E of 17, not bad. For those who speak Greek, this trade has an initial “delta” of 54%, which means that for every point the SPY moves, this package will move 0.54 points. The package starts is slightly long convexity (gamma), and because of the 8%-point differential in Implied Volatility, it earns decay (theta). Just remember, in a hard back up, you must be willing to own the market at the strike price of 275.

The window is not going to close today, but let there be no doubt, inflation is coming in the next few years. As detailed prior, demographics via an increasing Labor Force Growth rate will push up the inflation rate near 2023-25; and Fiscal spending via some form of MMT may well accelerate the process. Notice the Labor Force was already turning up before COVID, as was the of Occupied Housing from Millennial household formation. The average Millennial is 32 years old and entering their prime spending years as they have children and outfit their homes. This process is similar to what propelled the 1970s inflation when Boomers formed households. 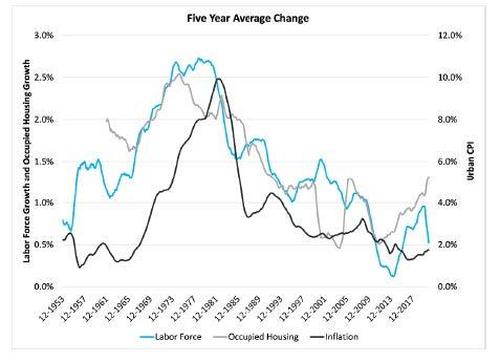 What is important to note is that increases in the Labor Force and Housing presage inflation by about five years. Demographics combined with Fiscal support will increase aggregate demand and push up prices.

The SX5E is the Dow Jones of Europe, a selection of 50 large stocks. It is presently trading at 3500; this is down 6.5% YTD, and 9.5% beneath its high. A primary reason is that the annual dividend of about 120 was cut to 83 (-30%). This compares to almost no change in the US (SPX) and a slight increase in Japan (NKY). Reasons for the SX5E cut varies, but they include mandates for banks to conserve capital until after the pandemic is resolved. With a vaccine in sight, distributions could be restored to what would be a 3.40% rate, a huge investment yield versus the negative rates offered for most European bonds. The is the continuous dividend yield for the SX5E versus the interest rate for the German Government five-year Bund

Combining the above, the blue line is five-year Forward (future) for the SX5E

Buying the SX5E in the future is mathematically similar to borrowing money at a compounded negative rate; in this case -0.54%.

A Mortgage REIT is different from the more common Equity REIT. mREITs do not own commercial real estate assets (hotels, shopping centers, apartments), but rather mortgages supported by residential and commercial property. Since they often own assets at the top of capital structure, they enhance their yield by using leverage (borrowed money), instead of credit risk.

As such, the main risks they face are: 1) The ability and the cost to borrow; and 2) Asset market (interest rate) volatility.

Both of these risks exploded last March as fear of an uncontrollable pandemic caused lenders to reduce their available credit lines and increase the borrowing costs. The coup de grace was vicious volatility that forced margin call liquidations. Not only was a portion of the Book Value (BV) of these mREITs permanently vaporized, but their market prices declined to a discount of those reduced levels.

No matter your thoughts about the public policy merit of the FED’s response to the pandemic, it is clear that: 1) The cost of short-term funding (ZIRP) will be low until at least 2023; and 2) Financial asset volatility will be repressed via QE.

It is generally not my policy to make specific asset recommendations, so the table below offers a diverse portfolio with some of the key indicators.

My support for Muni bond CEFs is cut from the same cloth as the preceding discussion for mREITs; and the risks and value propositions are the similar. Muni CEFs offer a simpler structure than mREITs since they use much less leverage and do not hedge their market risk. Generally, CEFs will buy $130 of assets for every $100 of value.

“Rumpelstiltskin at the Fed” – April 19, 2016 is still my all-time favorite Commentary. With no math, it is entertaining and informative for both the layman and professional; and its fundamental thesis is still valid. For the record, I am not a Gold-bug; but buy me a well-mixed Sidecar and I may nod in that direction. In 5000 years of human history there is no record of a kingdom printing the currency of the realm at a faster pace than the growth of the economy without generating inflation.

Contrary to Warren Buffett’s 2012 dismissal, Gold is not an asset; rather it is an alternate currency and a long-term store of value.

As per BitCoin, it is a speculative trading vehicle, nothing more, nothing less. BitCoin has a realized volatility near 50%, compare this to traditional “stores of value” such as EUR, JPY and GBP with vols near 7%, or even the Russian Ruble with a vol of 14%.

Gold is not a trade; it is a twenty-year horizon asset diversification to hedge against a blimp-sized black swan landing in your backyard. A 5% allocation is likely dead money for quite a while, but I sleep well at night. Perhaps it will be different this time, but you know my thoughts on that topic.

This is the best trade I have right now, period. Unfortunately, it can only be done by professionals with an ISDA agreement until I can figure out a way to offer it to High Net Worth and Family Office managers. [Which is cooking…]

The Trade: Buy a seven-year put option on a thirty-year bond. Actually, that is how this trade performs; in Wall Street terms, it is known as a seven-year expiry swaption on the twenty-year swap rate. Twenty-year interest rates are near a forever low of about  1.60%. At the same time, interest rate -jasper line- Implied Volatility is also near its forever low.

The investments offered here rely upon low and stable interest rates; this option is the macro-insurance policy for the entire portfolio. My Muni CEFs yield 4.35%; I clip the 0.35% for this option, and that leaves me with a 4.00% tax free return. My SPX and SX5E investments will do fine, unless interest rates rise significantly.

Millennial spending super-charged by a COVID fiscal package may finally ignite inflation, but it is not clear when. This option allows one to benefit from the MMT boost to markets with an escape parachute for protection.

Comments are always welcome at: harley@bassman.net. If you would like to be added to my distribution, just ping me.