After topping $1 trillion for the first time last week ($1.1 trillion at its peak), the total market cap of the cryptocurrency space has plunged by over 20% this week (back below $900 billion) after a bloodbath in bitcoin and ethereum evisceration this weekend. 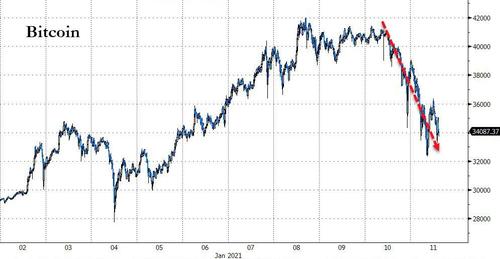 Ethereum plunged from over $1350 yesterday morning to $1006 this morning… 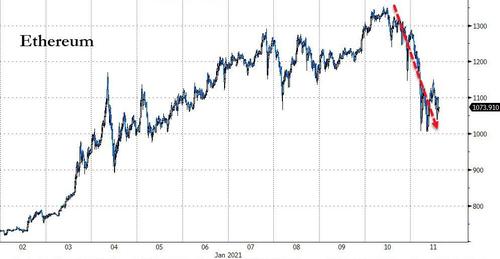 “It’s to be determined whether this is the start of a larger correction, but we have now seen this parabola break so it might just be,” said Vijay Ayyar, head of business development with crypto exchange Luno in Singapore.

Various catalysts for the drop have been suggested including dollar strength (despite Biden promises of trillion dollar deficit-spending plans), UK regulatory crackdowns (FCA fraud warnings and bank deposit blocks), and finally, one major institutional buyer throwing in the towel.

First things first, the dollar has been accelerating recently… 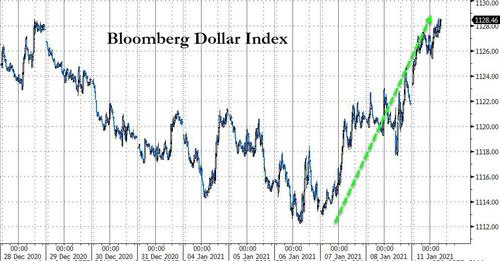 Some crypto traders have suggested comments from the U.K.’s financial watchdog could have raised concerns among recent market entrants.

The FCA issued a stark warning for consumers looking to profit from crypto: be ready to lose everything.

“Investing in cryptoassets, or investments and lending linked to them, generally involves taking very high risks with investors’ money,” the Financial Conduct Authority said in a statement.

The FCA’s concerns include price volatility, the complexity of products offered and the lack of consumer protection regulation around many of the products.

Additionally, The Times reports that some banks are refusing to transfers from bitcoin exchanges. 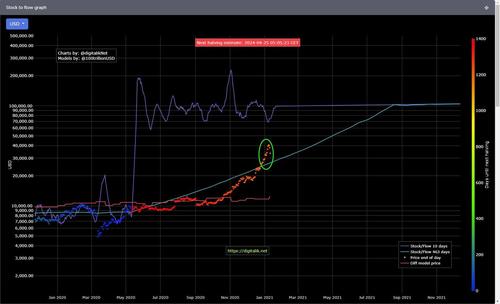 Finally, Guggenheim’s Scott Minerd sparked some concerns when he tweeted that it was “Time to take some money off the table.”

“Bitcoin’s parabolic rise is unsustainable in the near term.”

Bitcoin’s parabolic rise is unsustainable in the near term. Vulnerable to a setback. The target technical upside of $35,000 has been exceeded. Time to take some money off the table.

As a reminder, in late December, Minerd predicted Bitcoin could eventually reach $400,000.