Crypto Clubbed Overnight – What Happens Next? 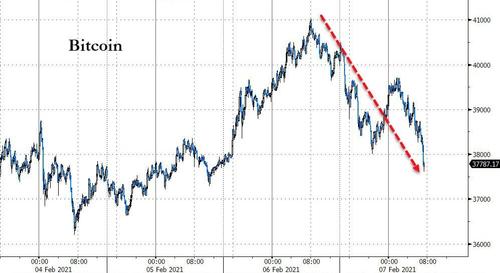 And Ethereum has erased some its recent spike gains quite quickly… 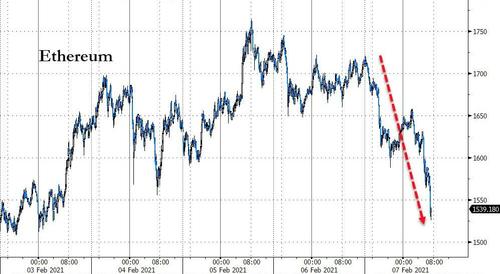 But, while the major coins are suffering, the retail-frenzied ‘GameStop effect’ now seems to be spilling over to digital assets like Dogecoin and Ripple through r/Wallstreetbets’ crypto wing, r/Satoshistreetbets. Jay Hao, CEO of crypto exchange OKEx, told Cointelegraph that there is a deeper cause driving this current phenomenon:

“There is a great sense of injustice about some of the opaque practices of Wall Street and the unfair distribution of wealth. I believe that more and more of society is beginning to wake up to this fact particularly with the K-shape recovery that we are seeing in which high-net-worth individuals have increased their wealth during the pandemic. With more platforms allowing retail investors direct access to invest in equities, we are seeing a democratization of the investment space and more power in the hands of the people.”

“The recent feats of r/wallstreetbets have made social media and Reddit users realize how powerful a force a decentralized online community can be when they put their mind to it. The ongoing legal troubles of XRP’s parent company Ripple Labs have rinsed out much of the shorts and made the gambit easier to execute, while the jocular nature of DOGE means it’s likable and easy to root for — thus in both cases there was not an immediate selling power to counter the pump.”

However, CoinTelegraph warns that investors should pay attention to he hype-to-activity ratio – an important metric currently as it measures the number of tweets a particular coin has about it per each $1 million in reported trading volume. As The Tie’s Frank told Cointelegraph, the average hype-to-activity ratio for crypto markets is 1.02, which essentially means that on average, cryptocurrencies see 1.02 tweets per $1 million in reported trading volume. Frank further elaborated on the way in which this ratio can be used as an indicator:

The coins that make the top of the ranking are possibly the most overhyped coins in the crypto industry, according to the metric from The Tie. In addition, Zhou mentioned that retail investors are the most susceptible to these schemes:

“Pump and dump schemes trap uninformed retail investors when they, for the fear of missing out a payday, enter the market, only to find themselves captured by a lower price before they even realize.”

However, it’s very far from just retail that’s playing here as veteran fund manager Bill Miller says he will invest in the Grayscale Bitcoin Trust through its flagship fund, the Miller Opportunity Trust.

“The Fund may seek investment exposure to bitcoin indirectly by investing in the Grayscale Bitcoin Trust, an entity that holds bitcoin,” the fund wrote in a filing with the U.S. Securities and Exchange Commission.

Miller Opportunity Trust had assets under management of $2.25 billion as of Dec. 31, 2020, making the fund’s potential maximum investment in GBTC $337 million.

So what happens next?

Bitcoin again hit nearly $41,000 this weekend. By doing so it nearly reached the previous highs from January 8 just above $41,500. Whenever an asset hits the area of previous highs it is time to pay close attention for a decision will be made. New highs that sustain, news highs that fail, a double top or a lower high with deep reaching corrective consequences, or a pause that refreshes before further new highs are made down the road.

What do the charts suggest at this stage of this momentum play?

First off, the recent near vertical move has hit a zone of technical resistance, coinciding with the 3.618 fib: 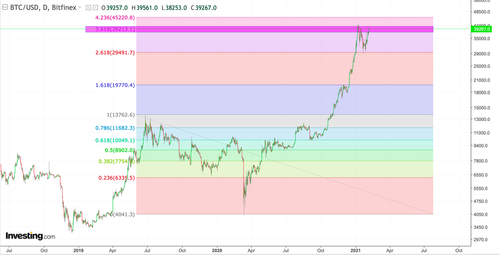 The most recent drop has found support at the 2.618 fib. The confluence of support and resistance of both fibs suggest that the fibs have relevance.

As such $BTC needs to break through the 3.618 fib with conviction to tackle the next zone at $45220. Failure to do so risks a larger reversal that breaks below the 2.618 fib.

Historical behavior suggests that sustained new highs may be a mission critical task here in the next few hours and days here in February. Why?

Because the chart structure looks eerily similar to 2017/2018: 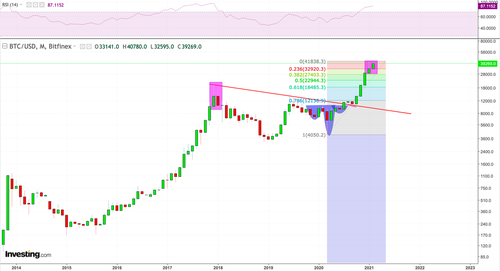 A monthly rejection candle and risk of a lower high the month following. In 2018 this was deadly as $BTC dropped from near $20,000 to below $4,000 in the months that followed.

The weekly chart highlights the similarity in the structure:

So new highs are key to invalidate the similarity in the structure. And be clear, if the structural takes on a similar path the 2017 highs could well be the next target lower. Failing holding that support the confluence interjection of key trend lines may ultimately be yield a target of around $6400 in 2022 . Perhaps good news for people who missed the current rally and want a better entry point. But that’s all theorem for now as nothing has broken and the bull case remains intact for now. But be mindful that confluence areas may end up becoming technical targets.

One other notable red flag. Note the building negative divergence as $BTC has approached the January 8 highs: 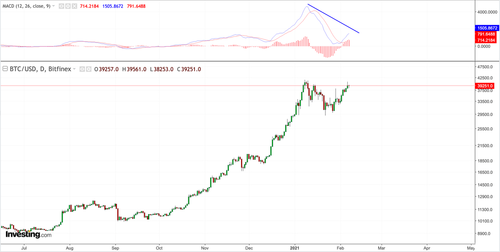 That could be problematic for even if $BTC does make new highs the negative divergence would be very pronounced.

So frankly $BTC buyers have a couple of key issues to watch in the days/weeks ahead.

Tomorrow a UK Judge Rules Over Extradition of Julian Assange to the US – Will President Trump Pardon Him First?