Crypto’s “Valentine’s Day Massacre” Is Over – BTC, ETH Surge Back Near Record Highs

As the world’s residents celebrated its love for one another, there was blood on the streets of cryptoville overnight.

But as America woke to celebrate Washington’s birthday, a wave of buying ripped crypto markets higher with Bitcoin back above… 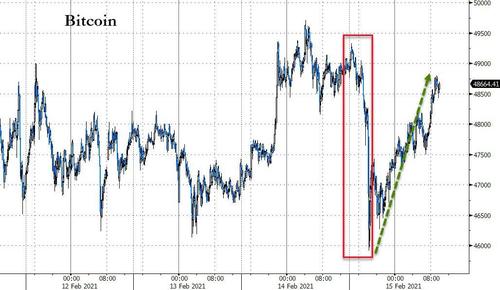 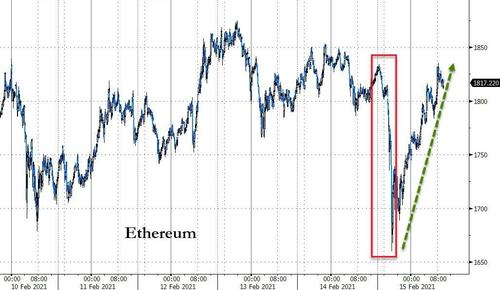 So what sparked the ‘Valentine’s Day Massacre’? CoinTelegraph’s Joseph Young notes that more than $1.89 billion worth of cryptocurrency futures positions were liquidated over the past 24 hours as Bitcoin and Ether sharply dropped.

Most of the liquidations came from Bitcoin and Ether, which accounted for $555 million and $336 million, respectively. But altcoins like XRP, EOS and Litecoin (LTC) also saw large liquidations as the market plummeted. 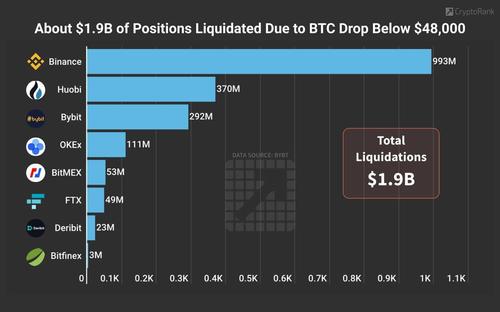 The lion’s share of the liquidations happened on Binance, while Bitfinex saw the least. This suggests that the former may have the biggest share of novice traders, according to Bitfinex chief technology officer Paolo Ardoino.

“Finex seems to have traders that use leverage slightly more carefully.”

Additionally, according to Ki Young Ju, CEO of CryptoQuant, a recovery was likely because there are enough stablecoin reserves in the cryptocurrency exchange market to trigger another leg up for Bitcoin.

In the crypto market, sidelined capital is often stored in stablecoins rather than cash or in bank accounts because they are much easier and faster to deploy on exchanges. Ju said that it is an ideal time to buy Bitcoin, given that a newfound rally is more likely. He wrote:

“If you’re a long-term investor, now is the time to buy $BTC. Not sure how many corrections would be along the way, but the on-chain indicator says there are enough stablecoins in exchanges compared to Bitcoins to get another leg up.” 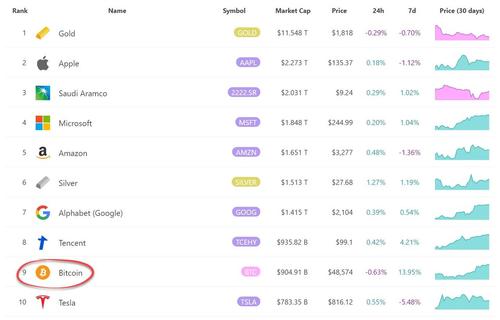 However, not everyone is embracing the rebound in crypto (and apparent rotation out of ‘old’ gold into ‘digital’ gold). Infamous hedge fund manager and Caribbean Island dweller offered up his usual mix of eloquent and deep thoughts on the rotation… and when not if to rotate into it…

Gold and silver have been total dogs these last six months. BTC has just outperformed. I attribute this to Wil Self and his Quantity Theory of Insanity.

That there is, after all, a finite set of molecules in the universe of alternative assets – the last hold out for those seeking diversification.

In this world, and maybe it’s just for the moment, but Peter gotta pay Paul, ‘cause there’s only a limited amount of sanity remaining in the world. So, when @ScottMinerd says theoretically BTC can go to $400k, i.e., 10 x higher than now…

I think that until the bomb goes off, that hypothesis requires XAU to go to zero Me? I’ve always figured that the only reason people go mad is because somebody’s gotta…right?

So, I think there’s been switching from gold and silver to BTC. I got friends who did this for sure, this cycle vs last time and I’m convinced the younger generation are all in BTC. I read somewhere that Grayscale Trust is one of the top ten securities bought by Millenials

…you got to think that if BTC existed back in the day, then I would have been buying such a bad ass in 2002. But back then, sticking it to the man meant buying the precious complex. Today we have variant pathways to insanity and all its turnpikes.

But the weird right here, right now, is the price action and correlations – if we do have to leave insanity city for a moment, then gold and silvers’ performance of late makes more sense – they topped out when US real rates bottomed and have struggled ever since in being absolute/terrible vs SPX. Real rate comparison charts sans a Bloomberg terminal are a stretch but the gold TLT chart is not a bad stand-in

And yet BTC has surged, and from a pure macro perspective maybe that shouldn’t have happened? Shouldn’t performance be identical in terms of factor analysis?? I’m just asking the question…

Instead, of late, BTC has correlated with TSLA. Like I said, borrowing from fields further away, BTC at this juncture, has the conscience temper of a savage autocrat spoiled by too much adulation…

The real test of your understanding and investment success is when you CAN buy something after it’s been kicked in the teeth by the mob rather than held aloft and carried high on the shoulders of an adoring mass. I’ll take my chances that BTC pulls back.

The industrial narrative of the supply/demand balance in silver has switched and now works with us nutters and not against us like it did in the 2000s.

Retail’s always long. Good on you! But in the 2000s one of the main industrial applications for silver was photographic related demand which was declining as digital took over.

For those institutional investors that seek a leitmotif to justify their actions – me? I just buy things going up – it was almost impossible to get behind and properly invest in such a whimsical investment

– but now you need silver for solar power & the circuit boards in electric vehicles etc – Whimsical squared?  I think you’ve got a green light to be as mischievous as you dare be…

Still, The FT is trying its best to sit on the fence – at once suggesting this is the birth of a new asset class… and the greatest bubble of all time… 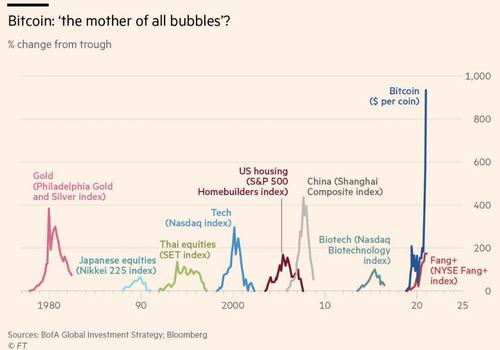