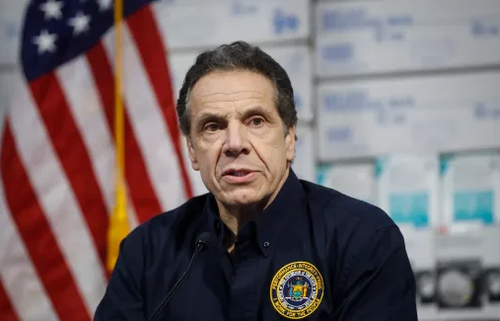 New York State Assembly Minority Leader Will Barclay (R-Pulaski) said on Monday that his GOP colleagues can’t force the Democratically controlled Assembly to take up the measure, “But we’re going to keep pounding on this issue,” he said, according to Syracuse.com.

Barclay added that the claims of inappropriate behavior are just one of many issues which have compromised the governor’s credibility.

Already about 30 Democratic lawmakers have called on Cuomo, a Democrat, to resign as he faces a federal inquiry about Covid-19 nursing home data and allegations of sexual harassment in the workplace. That includes a resignation call from Senate Majority Leader Andrea Stewart-Cousins, the top Democrat so far to call for Cuomo to step down.

“If they really believe in resignation, why not start impeachment?” Barclay said in a news conference today in Albany.

On Friday, the Wall Street Journal revealed that Cuomo’s top advisers successfully intervened in pushing state health officials scrub a public report showing that by July 2020, nearly 10,000 New York nursing home residents had died in the pandemic. The report excluded nursing home residents who later died in hospitals after becoming sick in long-term facilities, resulting in a “significant undercount of the death toll attributed to the state’s most vulnerable population,” according to the report.

“The Health Department resisted calls by state and federal lawmakers, media outlets and others to release the [full] data for another eight months,” according to the Journal.

State officials now say more than 15,000 residents of nursing homes and other long-term-care facilities were confirmed or presumed to have died from Covid-19 since March of last year—counting both those who died in long-term-care facilities and those who died later in hospitals. That figure is about 50% higher than earlier official death tolls. -WSJ

The published version of the data said just 6,432 nursing home residents had died, when in fact over 15,000 residents of nursing homes were either confirmed or presumed to have died of COVID-19 since last March. Notably, Cuomo’s administration issued a March 25 directive that no nursing home could refuse to readmit residents or admit new residents who had COVID-19.

On Sunday, Cuomo said he would not resign after Senate Majority Leader, Andrea Stewart-Cousins demanded his resignation in the wake of two more accusers stepping forward to accuse the Governor of inappropriate behavior, bringing the total to five.

To launch an impeachment, a majority vote would be required from the Assembly’s 150 members to begin impeachment proceedings – which is unlikely to happen unless a majority of Democratic Assembly members get behind the effort.

Also on Monday, approximately 20 Democratic women in the assembly signed a statement insisting that Attorney General Letitia James be allowed to investigate the claims against Cuomo.

In addition to denying sexual misconduct and suggesting his accusers have simply misconstrued his sense of humor, Cuomo and his staff have outright denied wrongdoing in the handling of nursing home data – which they withheld from state lawmakers last year out of fear that the Trump DOJ would launch an investigation.

“The real problem now is the governor has lost so much credibility and trust that we don’t feel like he can go forward and govern,” said Barclay.