Shares of Daimler were up as much as 9% in Frankfurt trading after the company announced it is planning to spin off its truck unit from its Mercedes Benz unit, separating its truck business from its luxury car business, by year end.

The company will distribute a majority of Daimler Truck to shareholders in a plan announced on Wednesday, according to Yahoo. The move is the biggest “significant shake up” since Ola Kallenius took over nearly two years ago, the report notes.

Investors had been clamoring for the automaker to unlock value from the company’s compressed valuation. Daimler had previously changed its corporate structure to give “more independence to its main divisions,” the report says. However, this did little to appease the market and investors. 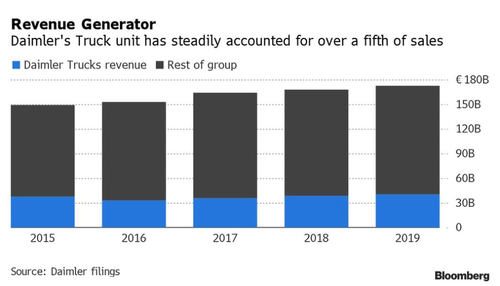 Bernstein analyst Arndt Ellinghorst told Yahoo: “The outcome is extremely positive for all shareholders and we’re convinced that this is also in the best interest of all employees at Daimler. It’s also a strong positive statement for the German corporate landscape and financial market.”

Deutsche Bank wrote in January that the truck unit could be worth about $35 billion on its own, should its valuation align with current industry powerhouse Volvo. It’s going to be a tough ask, however, as Volvo sports industry leading operating margins of almost 13%.

But the company could see some macro tailwinds heading deeper into 2021. After all, Volvo has said the outlook for the global truck market is now robust, noting that “transport and construction activity has fully recovered in most markets and improved customer confidence.”