Dalio Wants You To Swap Treasuries For Chinese Debt

China’s bonds have shown incredible stability during the global debt selloff. Yields on 10-year Chinese bonds fell 3 bps over the past month, while the U.S. rates surged 39 bps. Bridgewater’s Ray Dalio noted last week that investors dumping U.S. Treasuries for Chinese bonds is part of a “classic” historical cycle where capital markets of a rising “empire” challenge the existing superpower.

The current environment where central banks and other international investors hold more than a third of their bond portfolio in U.S. Treasuries and just 6% in Chinese bonds is inconsistent with the relative economic positions of the two countries, according to Dalio.

“Their overweighted position in U.S. bonds is largely because of the ‘exorbitant privilege’ the U.S. has had being the world’s leading reserve currency, which has allowed the U.S. to overborrow for decades,” Dalio wrote on LinkedIn. “As part of this cycle, there is the emergence of the currency and capital markets of the rising and competing empire. Consistent with this classic cycle there is now a shifting from U.S. bonds to Chinese bonds going on.” 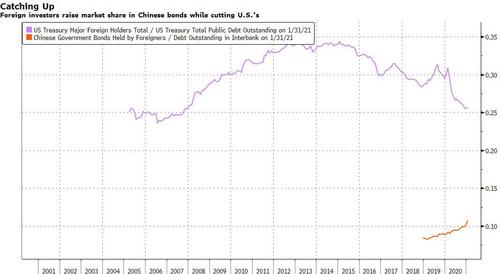 2. The Alaska meeting is a microcosm of the cycle of competing empires.

The bickering at the first high-level talks between the U.S. and China since Biden took office underscores the deep divide between the two countries. An optimist might argue that the public squabble may turn out to be a good thing as it resets the expectations and allows both sides to be more pragmatic and realistic about what they can achieve. “Despite the spat, is there a second path other than to learn to co-exist in this fierce power struggle?” said Hu Xijin,chief editor at the Global Times. Climate change, Covid-19, and cybersecurity are among the low-hanging fruits for co-operation, said Gabriel Wildau, a China analyst at Teneo, a consultant firm.

3. Central banks are starting to diverge.

Russia, Turkey and Brazil raised interest rates last week to cool inflation. Norway’s central bank expects to start raising rates in the “latter half” of this year, putting it on path to be the first in the rich world to tighten policies. In contrast, the Fed signaled it may keep rates unchanged through 2023, even as it expects inflation to exceed its target. The Bank of Japan widened the range of bond yields it targets to gain flexibility.

The policy divergence has been the missing ingredient for higher currency volatility. It looks like we are getting some.