“Cash is, and will continue to be, trash,” is how Bridgewater founder Ray Dalio sums up the future for Americans (and for that point the rest of the fiat-sponsored world), but in his latest letter, he warns that amid the mad money priting and fiscally-enabled inflation, bonds may also be ‘trash’… and in fact any US-dollar-denominated asset. 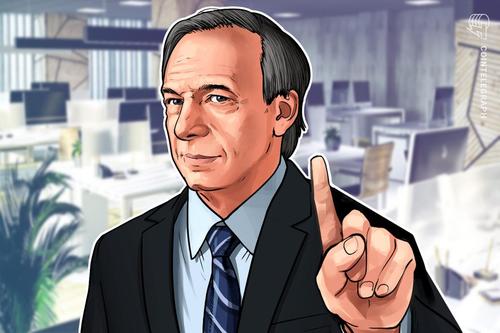 “The economics of investing in bonds (and most financial assets) has become stupid,” he said in his latest post on LinkedIn.

“Rather than get paid less than inflation why not instead buy stuff – any stuff – that will equal inflation or better?”

The charts below that go back to 1900 show these things – real bond yields, nominal bond yields, and nominal/real cash rates for the US, Europe, and Japan. 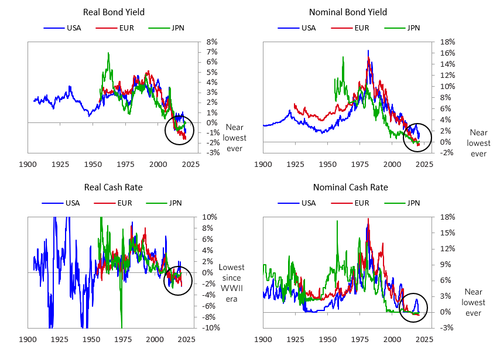 2) the internal conflict cycle due to wealth, values, and political gaps, and

3) the external conflict cycle due to the leading world power, its world order, and its reserve currency (now the US) being challenged by the leading rising power (China).

Rather than being unusual, Dalio notes that the current dynamic has happened repeatedly throughout history… and never ends well…

Credit growth is a stimulant that a) provides buying power that causes spending on financial assets, goods, and services and the economy to go up and b) creates debt obligations that act like a depressant when the time for paying back comes. To visualize how the cycle works, imagine that the economy is a person and government policy makers are doctors. When the economy’s pulse plunges the doctors run to inject a big dose of stimulation into it. When you see them running to the patient and injecting the giant dose of stimulation, you should buy reflation assets like stocks, inflation-indexed bonds, and gold because the response to the stimulation will initially cause these assets to rise before the stimulation passes through to the economy and the patient starts running around. This injection of money and credit into the system pushes interest rates down relative to inflation and down relative to the nominal growth rate of the economy, which pushes financial prices up. When interest rates are below inflation rates and growth rates that lowers debt-service burdens in relation to incomes, which makes it easier to service the debts. Besides the real and nominal interest rate cuts being stimulative, the increased supply of money injected into the system bids up investment asset prices and can cause financial market bubbles even when actual economic conditions are still weak. After the effects on the financial markets happen, the economy (at first) and inflation (with a lag) start picking up. When all this picking up happens, one should expect the “doctors” to start cutting back on the sizes of the doses of the stimulants, and if the patient is becoming a bit manic one should expect them to administer sedatives (i.e., tighter monetary policies).

The problem with administering these stimulations over decades is that they leave unhealthy residual effects in the form of growing and large debt liabilities and assets. As the amounts outstanding grow the risks also grow. When these build up to dangerously high levels, which typically takes place over 50 to 100 years, that causes problems. In these big debt cycles debts grow faster than incomes. That is the “upwave.” Naturally those who lent the money want to get paid with more buying power than they gave when they bought the bonds and those who borrowed the money are carrying extra burdens of having to make those payments. The debts are like nuclear waste that isn’t easy to dispose of. Eventually these debt liabilities and assets become too large and burdensome, so they have to be reduced one way or another. When that realization occurs abruptly it triggers the previously described “run on the bank”—central bank money printing—market action dynamic that I call the “reverse wave.” That is traumatic for those who are holding the debt assets and traumatic for most everyone though it eventually reduces the ratios of debt and debt service to incomes. It is also traumatic for capital markets, capitalism, and economies. During this credit/debt collapse people realize that they don’t have as much buying power as they thought and financial and economic conditions worsen. There is not enough real money and credit so taxes are also typically raised a lot and there is typically a lot of conflict over who should get how much money from whom…

…it appears to me that we are at that part of the credit/debt cycle.

Other highlights from the billionaire’s note include:

Rabobank’s Michael Every disagrees with Dalio:

As someone who over 20 years ago was wading through medieval UK inflation data, Homer’s ‘The History of Interest Rates’, and Kondratiev waves and their overlap with centuries of military conflict in Europe, I heartily concur with taking a big picture view; and with the idea that investing has become stupid; and that the price of most financial assets certainly is; and I would add that neoclassical economics is pretty stupid too when you dissect it.

However, I fail to see how looking at a shift that is about to either massively boost US fiscal stimulus and raise bond yields; and/or potentially reduce the cost of capital; and which would logically then have to see the US become more mercantilist too; at a time when the world relies on USD; and while the US remains the financial and military hegemon, argues for walking away from all USD-denominated assets and towards what Dalio suggests as a long-run hedge: Chinese assets.

Why do all these kind of policies work for China (argues Ray implicitly) but not for the US?

However, Dalio concludes with some political machinations and warnings to Democrats (and gold an crypto holders)…

Based both on how things have worked historically and what is happening now, I am confident that tax changes will also play an important role in driving capital flows to different investment assets and different locations, and those movements will influence market movements.

If history and logic are to be a guide, policy makers who are short of money will raise taxes and won’t like these capital movements out of debt assets and into other storehold of wealth assets and other tax domains so they could very well impose prohibitions against capital movements to other assets (e.g., gold, Bitcoin, etc.) and other locations. These tax changes could be more shocking than expected.

For example, Elizabeth Warren’s proposed wealth tax is of an unprecedented size that, based on my study of wealth taxes in other countries at other times, will most likely lead to more capital outflows and other moves to evade these taxes. The United States could become perceived as a place that is inhospitable to capitalism and capitalists. Though this specific wealth tax bill is unlikely to pass this year the chances of a sizable wealth tax bill passing over the next few years are significant. Conflicts can increase in such difficult times when accompanied by large wealth, values, and political gaps, and the environment can become inhospitable to capitalists leading them to run from less hospitable places to more hospitable places.

I think this is the new paradigm.

Responding, however, CoinTelegraph reports that Michael Saylor, CEO of MicroStrategy, said that Bitcoin is the answer.

“I agree with (Dalio) that bonds no longer work as a treasury asset,” he wrote on Twitter.

“Respectfully, Bitcoin is the obvious solution, and much more practical than ‘a well-diversified portfolio of non-debt and non-dollar assets’ in ‘Asian emerging…markets.’”

MicroStrategy continues to add to its BTC position, revealing a purchase of 260 BTC for $15 million last week. In total, the company holds 91,064 BTC.

Dalio himself has changed his position markedly on Bitcoin, admitting that his misgivings were based on a lack of knowledge about how the cryptocurrency works.

His perspective chimes with that of Arthur Hayes, former CEO of derivatives giant BitMEX, who in a post of his own told investors to go long on cryptocurrency and interest rate volatility.