With the country following with bated breath every new development in the war between WallStreetBets and Wall Street, and specifically how an army of angry teenagers which targeted a handful of bearish hedge funds and steamrolled them into submission with trillions in excess liquidity, some are wondering what’s next: after all there is only so much you can do with a handful of very shorted stocks (while even Wall Street is now trying to muscle in on the less shorted stocks with recos to buy these) after you have ramped them up and down and then back up again. What’s the endgame.

Indeed, there is a sense that this trend is starting to get a little tired, and the most shorted names themselves are trading near session lows (although the latest round of Robinhood restrictions which laughably permits just 2 shares of bitcoin be purchased certainly has something to do with this).

Here we respectfully bring to the attention of r/wallstreetbets something they may have missed in their search for shortable equities: move to futures, where on asset stands out. According to the CFTC’s latest Traders in Financial Futures report, the net short position in bitcoin futures is now the biggest it has ever been. 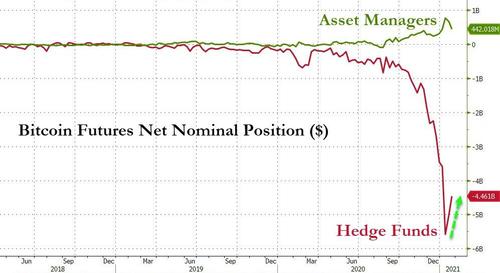 What better way to hammer those evil hedge funds than to follow up the “short” colonoscopy with a moonshot in bitcoin, which leads to even more billions in losses.

Furthermore, now that Elon “#Bitcoin” Musk has shown just how much clout he has in the space, when one tweet…

… he pushed bitcoin up by 15%, or almost $100 billion in minutes, a little strategic coordination between the world’s most popular reddit forum and the world’s richest man should successfully push the world’s most valuable cryptocurrency above $100,000 in just a few days.

When YOLO Goes “YOL-Oh No!”

Imagine If The Virus Had Never Been Detected