DeBlasio Mocks Fox, Doubles Down On ‘Mission To Redistribute Wealth’

New York Mayor Bill de Blasio laughed off criticism from Fox News over Friday comments that ‘redistribution of wealth is an important factor toward ending structural racism in education,’ saying in Monday remarks that Fox “apparently was very interested” in what he had to say. 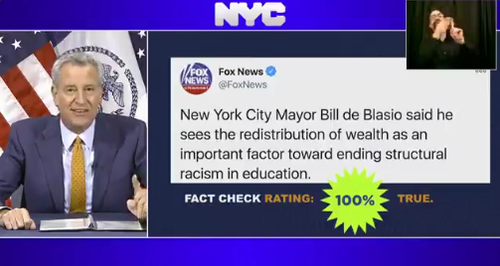 “I’m going to say it one more time in case Fox News is watching again: ‘NYC mayor sees the redistribution of wealth as an important factor toward ending structural racism in education.’ (roughly 2:45 mark)

JUST IN: Bill de Blasio doubles down on “Our mission is to redistribute wealth” remark: “If we think we’re going to deal with structural racism and segregation without redistributing wealth, we’re kidding ourselves.” pic.twitter.com/igvTpXg32G

“Exactly right. I don’t get to say it very often, but Fox News got it exactly right. Amen,” he added. “We are going to fight structural racism through redistribution, so Fox News, congratulations, fair and balanced coverage right there.”

“If we think we’re going to deal with structural racism and segregation without redistribution of wealth, we’re kidding ourselves,” he continued. “Nothing changes unless you put the resources behind it.”

Getting Out Before The Crash…