The announcement came from Mayor Brandon Scott earlier this week, who allowed restaurants to partially open with indoor capacity set to 25% and outdoor dining to 50%. He felt optimistic about current COVID-19 health trends in the city.

However, strip clubs were not permitted to open; this triggered outrage among sex workers who protested the City Hall Wednesday afternoon.

“This is a deeply unfair move, in our view,” an anonymous spokesperson for adult entertainment business owners in Baltimore said in a statement. “We’re being selectively targeted to stay closed. If you can open a gym or put on a stage show, you can have a gentleman’s club open. There’s some other agenda at work here, and it’s very insensitive to the not inconsequential number of people who make their livings through the adult entertainment industry.”

The statement also pointed out cooks, bartenders, janitors, security guards, and other tradespeople are also affected by the mayor’s harsh coronavirus measures.

At the protest, strippers chanted, “Sex work is real work.” 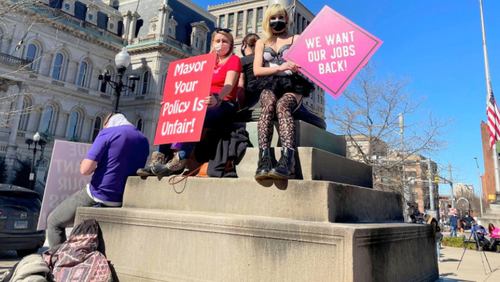 Dozens of strippers showed up in front of City Hall to voice their anger at the mayor as mandatory government shutdowns have ruined their lives.

At City Hall for @NAACP presser in support of Marilyn Mosby. In the background? A rally to reopen Baltimore strip clubs. pic.twitter.com/byb7PPPzEm

Bella Gluscevich, a 22-year-old stripper at Fantasies in Baltimore, told Baltimore Brew that it’s been tough during the pandemic.

“It’s been really rough being out of work; I lost my apartment, my car, and I haven’t been able to pay for school,” Gluscevich said.

A provision in the government’s Paycheck Protection Program (PPP) banned strip clubs from collecting stimulus checks – the industry across the country has been devastated. But as capitalism always prevails, some clubs have found ways to survive.

A New Gold Standard? Kremlin Confirms Intention To Back Ruble With Gold And Commodities

The “Scariest Paper Of 2022” Reveals The Terrifying Fate Of Biden’s Economy: Millions Are About To Lose Their Job

“If You Come To US Illegally, You Will Be Returned” – Homeland Security Secretary To Travel To Mexico Border