More than 80 have been killed in anti-coup protests which have spiraled Myanmar into turmoil and chaos since the Feb.1 arrest of the country’s civilian leadership during military raids on their homes over what the army alleged were ‘fraudulent’ elections.

Reuters details of the latest that, “Security forces opened fire on demonstrators in Myanmar’s commercial capital Yangon on Sunday and at least three people were killed as protests against the military’s seizure of power continued for a sixth week, witnesses and domestic media said.” 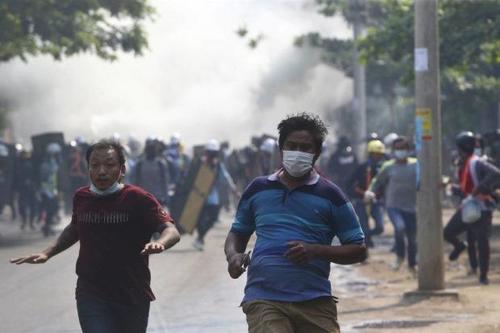 The demonstrators are getting surprisingly bolder in their tactics in confronting police despite widespread reports of growing civilian casualties due to police and security forces often restoring to the use of live ammunition alongside riot control measures.

Reuters continues, “Video showed protesters holding handmade shields and wearing helmets as they confronted security forces in the Hlaingthaya district of the city. Plumes of black smoke rose over the area.”

The report cites that over 2,100 were arrested on Saturday alone, while Chinese state media (seen as quietly supportive of the junta) has alleged that “two Chinese-funded clothes factories in the district were set ablaze by people who arrived on motorcycles, armed with iron rods, axes and gasoline.”

At a moment various cities are now resembling a “a war zone” – according to eyewitnesses cited in the report, some officials from the now essentially outlawed formerly ruling National League for Democracy Party, which was headed by State Counsellor Aung San Suu Kyi before her arrest, are calling for citizens to arm themselves against security forces.

“At least two people were killed elsewhere in the Southeast Asian nation, a day after Mahn Win Khaing Than, who is on the run along with most senior officials from the ruling National League for Democracy Party, said the civilian government would seek to give people the legal right to defend themselves,” Reuters adds.

Khaing is leading members of parliament who have escaped arrest to form a ‘legitimate’ government in exile, called the Committee for Representing the Union Parliament (CRPH). This ‘acting government’ is seeking external recognition and is calling for revolution against the ‘illegal’ military leadership within the country. He posted the following message on Facebook:

“This is the time for our citizens to test their resistance against the dark moments.

In order to form a federal democracy, which all ethnic brothers, who have been suffering various kinds of oppressions from the dictatorship for decades, really desired, this revolution is the chance for us to put our efforts together.

Despite our differences in the past, this is the time we must grip our hands together to end the dictatorship for good.”

The CRPH has been dubbed ‘treasonous’ by the military rulers and has threatened to arrest anyone found cooperating with them.

Indeed should the tens of thousands currently in the streets in protest become armed, the country would likely rapidly spiral into a civil war; however, it’s also likely the junta has likely already moved against any potential ‘opposition militia’ which might have been previously organized enough to pose a threat.