Authored by Meghann Myers via MilitaryTimes.com,

Defense Secretary Lloyd Austin has called on the services to conduct a 60-day stand-down on the issue of extremism in the military, prompted by the Jan. 6 attack on the the Capitol and subsequent reports of both active-duty and former service members attending a rally calling to overturn the 2020 election and the riot that ensued. 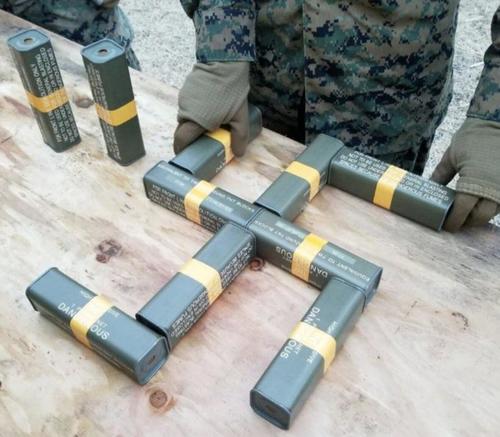 Military explosives arranged in the shape of a swastika. Defense Secretary Lloyd Austin on Feb. 3 called for a stand-down to confront extremism in the services. (Screenshot from Twitter account @Jacobite_Edward)

Austin held a meeting Wednesday of the service secretaries and Joint Chiefs, Pentagon spokesman John Kirby told reporters, to ask them about their concerns, and ideas for improving the situation.

“Even though the numbers might be small, they may not be as small as we would like them to be, or we believe them to be, “Kirby said of the prevalence of troops with extremists views, ties or activities. “And that no matter what it is, it is not an insignificant problem.”

Guidance is forthcoming on what Austin expects to see after the 60 days.

“It wasn’t a blithe, “Hey, just go talk to your people,’ ” Kirby said of Austin’s direction to the service secretaries and Joint Chiefs.

“He was very clear that he wants commands to take the necessary time. And I didn’t hear him be overly proscriptive about that .. to speak with troops about the scope of this problem, and certainly to get a sense from them about what they’re seeing at their level.”

The Defense Department does not centrally track troops who have been investigated for domestic terrorism or extremist sentiment, and neither do the services, making it difficult to get a read on how prevalent the problem is.

Kirby told reporters on Jan. 28 that the FBI opened 143 investigations into troops and veterans in 2020, 68 of those for domestic extremism.

DoD does have a 2012 instruction that prohibits extremist activities, though it doesn’t clearly define extremism itself. Generally, the services handle these investigations at the unit level ― or with the FBI, if it comes to plans for attacks, for instance ― and there is no requirement to report those up to service headquarters.

Military Times’ own polling has shown that, anecdotally, more than one-third of active-duty troops, and more than half of minority service members, have witnessed signs of white supremacy in their colleagues. Further, survey respondents ranked white nationalism as a bigger national security threat domestic terror groups affiliated with Islam, for instance.

“The events of Jan. 6 served as a wake-up call for this department,” Kirby said.

At the same time, reports of current or recently discharged service members espousing support for or participating in violent attacks against government officials have popped with regularity in recent years.

Kirby said details would follow on the guidance for the stand-down. Common for safety issues ― and more recently, for sexual assault and suicide ― stand-downs are usually implemented to carve out time for further training, discussion or other events where units to focus on the issue at hand.

A two-month window would allow enough time for units to strategize and schedule how they’ll stand down, rather than declaring a specific day for everyone to do the same work.

“We owe the force, we owe these leaders some training materials, some deeper, more specific guidance about … what the expectations are for the stand-down, and some thoughts about how feedback can be provided,” Kirby said.

Despite Numerous FOIA Requests for Relevant Information, the NSA Is Withholding Government Documents Related to the Life and Death of Seth Rich