Democrats are willing to ‘go it alone’ on a new COVID-19 relief package if Republicans refuse to move quickly on a ‘very strong’ relief bill.

In a Thursday warning, Senate Majority Leader Chuck Schumer (D-NY) threatened to circumvent the 60-votes required to pass major legislation by invoking a budget process known as reconciliation – which lets some bills bypass the legislative filibuster. 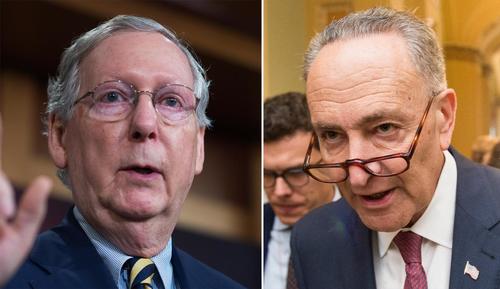 If Republicans “decide to oppose this urgent and necessary legislation, we will have to move forward without them.”

“We have a responsibility to help the American people fast, particularly given these new economic numbers. The Senate will begin that work next week,” he added.

“We have a responsibility to help the American people fast — particularly given these new economic numbers.” ⁰⁰JUST IN: Schumer says the Senate will start considering a Covid-19 relief funding bill next week pic.twitter.com/OqBZGnnyxF

Schumer, speaking from the Senate floor, said that it was the “preference” of Democrats to work with Republicans on a sixth coronavirus relief package, but that if GOP senators wanted to move too slowly, or go smaller than Democrats think necessary, they will move more aid without GOP support. –The Hill

“The dangers of undershooting our response are far greater than overshooting … so the Senate as early as next week will begin the process of considering a very strong COVID relief bill,” said the 70-year-old Schumer, who likely won’t be alive when the consequences of reckless spending fall on the shoulders of younger generations.

In order to proceed with reconciliation, Democrats will need to pave the way by passing a budget resolution which instructs committees to draft legislation.

On a Tuesday conference call, Schumer told his fellow Democrats to be prepared to vote on that resolution as soon as next week.

“In keeping our options open on our caucus call today I informed senators to be prepared that a vote on a budget resolution could come as early as next week,” he said.

As Democrats appear poised to pass coronavirus relief with a simple majority, Republicans in a bipartisan Senate group appear frustrated that they could be sidelined.

The bipartisan group had a call with the White House last weekend and GOP senators said that the administration had provided them with data about their $1.9 trillion coronavirus plan. –The Hill

“I think it would be wise for the new administration to work to try to get a bipartisan proposal that can be moved. … We’re giving an opportunity to come together on important and timely legislation so why wouldn’t you do that rather than trying to move it through with reconciliation and having a fully partisan product,” said Sen. Lisa Murkowski (R-AK) in comments to reporters.

What’s Going On Here? Another Video Surfaces of Capitol Police Leading Protesters in Washington Into the Capitol