On Monday afternoon, House Dems released a draft of their fiscal package. Amid the top highlights is that Biden is going for the full $1.9T and is not succumbing to pressure to reduce the size of the bill to accommodate the GOP nor centrist lawmakers who may be at-risk in 2022 elections. Further, the timing appears to be Feb 22 to get a bill completed and sent for a floor vote with the goal of putting the bill into law by early/mid-March.

Following criticism that Joe Biden’s $1.9 trillion stimulus package would benefit the rich, House Democrats agreed that individuals earning more than $100,000 and couples with income above $200,000 will not be eligible for direct payments. Draft legislation released Monday by the House Ways and Means Committee (full summary below) called for $1,400 payments for single people earning $75,000 or married couples earning $150,000. The checks will now completely phase out for individuals making $100,000 or joint taxpayers making $200,000.

The payments will scale down more quickly than previous rounds, where the top levels were determined by the size of the payment and the number of children in the household. The first round of checks, approved in the Cares Act last March, started at $1,200 before they began phasing out. 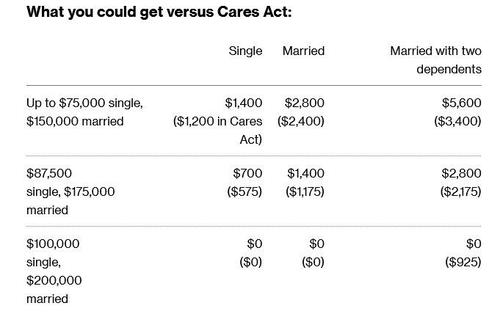 According to Bloomberg, House Democratic leaders rejected a push by some moderate Democrats to lower the threshold at which payments begin phasing out at $50,000 for an individual and $100,000 per couple. One such proponent was the man who may be the most important Senator for the next two years – Joe Manchin, a West Virginia Democrat – who is critical to the Democrats’ 1-person majority in the Senate, and who has been pushing for lower income caps to qualify for the payments. Manchin told reporters on Monday that he wants to make sure that there is a “hard stop” so people making $250,000 or $300,000 don’t get payments and that the money is directed to people who are “truly in need.”

On the other end, progressives and socialists such a Senators Bernie Sanders have pushed for more inclusive thresholds. Last week, the Senate voted on a measure that would seek to bar “upper-income” people from qualifying for stimulus checks, but didn’t define the term.

Previously, a group of 10 Senate Republicans had proposed to send $1,000 payments to individuals earning as much as $40,000 or married couples earning twice that. Those checks would phase out completely once a single earner makes $50,000 or joint filers earn $100,000.

So what else is in the House Dems version of the fiscal package (via JPM).

More importantly, expectations for the size of the final package are increasing as there does not appear to significant pushback from  moderate Dems to the size and composition of the bill. That said, keep an eye on comments from Senators Manchin and Sinema, as Dems in traditionally GOP states they are more likely to oppose overly Progressive measures.

The tentative timeline is Feb 22 to get the bill to a floor vote, which target a final passage by early/mid-March.

According to Goldman, congressional leaders are aiming for passage ahead of the March 13 expiration of jobless benefits, but it might take until late March if things do not go smoothly. The relevant congressional committees appear to be aiming to pass their legislation late in the week of February 8 though in some cases this could slip to the following week. The House might be able to pass the combined package by late in the week of Feb. 22 but this might take until the week of March 1.

From there, the timing will depend mainly on how long it takes to get the bill through the Senate. Senate debate on a reconciliation bill is limited to 20 legislative hours but can take longer if there are many amendments. In practice, Senate consideration is likely to take a full week. From there, the time to enactment will depend mainly on whether there are any differences between the House and Senate versions, which would lead to additional negotiations and another round of votes in the House and Senate.

If congressional Democrats in the House and Senate are unanimous in their support for a single pre-negotiated package, Congress should be able to get the bill to the President in early March. In the more likely event that political disagreements arise that must be worked out, enactment in mid- to late March looks likely. Even with those delays, this would be on the quicker side of prior reconciliation bills. As shown in Exhibit 1, it took Congress only four weeks after passing the budget resolution to enact reconciliation legislation in 2001, but in 2003 and 2017 the process took longer. 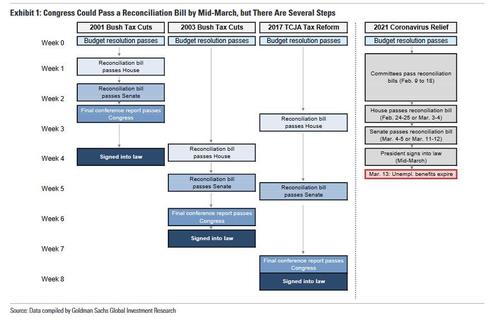 Finally, from a market standpoint, JPM notes that “the larger the fiscal package, the stronger the support for multiple investment themes, including: Reflation, Cyclical Rally, Reopening, and Value Rally.

Equity sectors to play within these themes include: Banks; Emerging Markets; Energy and Semis.

As JPM concludes, “the completion of earnings season combined with a fiscal package becoming law may create the next leg higher in Equities, adding fuel to the reflation/cyclical trade.”

Ripple Plunges After Coinbase Announces It Will Suspend XRP Trading