Despite plunging ‘hard’ economic data and viral lockdowns across the nation, December’s preliminary tumble in Manufacturing PMI has been (rather stunningly) revised to a further improvement. 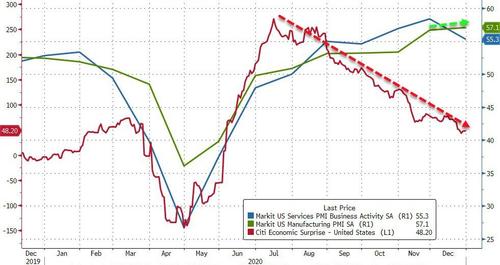 From a decline to 56.5, and against expectations of a further drop to 56.3, the final Dec print for Manufacturing PMI rose to 57.1 – its highest since September 2014! 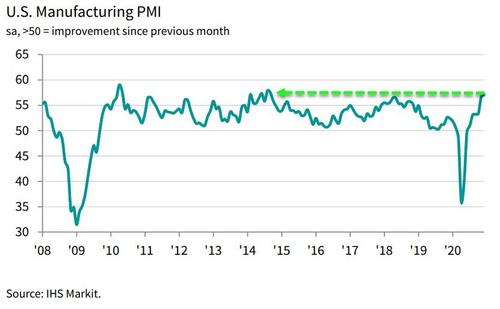 As Markit notes below, the shipping delays could be the reason for the surprise rise as this is embedded in their model as a positive (so much demand, they can’t keep up), when in this case it is nothing of the sort as pandemic disruptions are to blame!

“Manufacturers reported a strong end to 2020, with production and order books continuing to grow, albeit with the rates of expansion slowing as a result of rising virus case numbers and related restrictions. Producers of consumer goods reported a marked downturn in orders and production, reflecting weakened consumer expenditure amid the resurgence of COVID-19.

“However, the survey also highlights how manufacturers are now not only facing weaker demand conditions due to the pandemic, but are also seeing COVID-19 disrupt supply chains further, causing shipping delays. These delays are limiting production capabilities as well as driving producers’ input prices sharply higher, adding to the sector’s woes.

“Firms nevertheless remain highly positive about the outlook for the year ahead, anticipating that vaccine roll-outs will help drive a further recovery in 2021, although some of November’s post-election exuberance has been tamed by the recent rise in virus case numbers, suggesting the near-term outlook will remain challenging.

Finally, we note that the hope-filled surge in ‘soft’ survey data is rapidly falling back to the ugly reality of ‘hard’ data’s slump… and we suspect if Markit’s model interpreted the rise in shipping delays as the negative that it is… this survey data would be even worse! 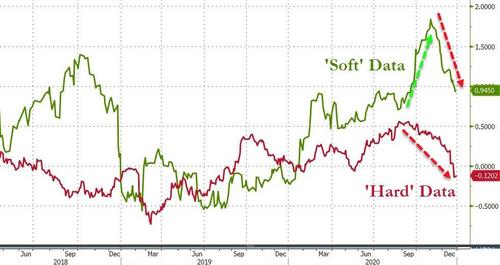