Despite officials’ virtue-signaling pledges to carry out the ‘most-equitable vaccine rollout’ ever in the history of the world, it appears human people, with minds of their own, have a habit of messing up the best-laid plans of the central-planning overlords. 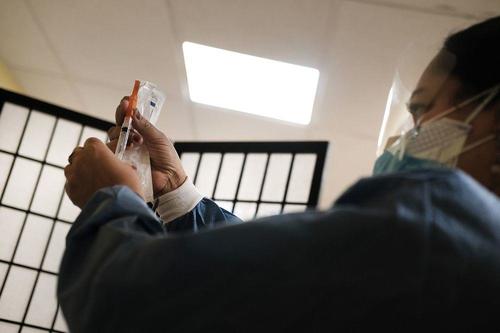 While most states/cities have been, rightly, prioritizing the elderly and most vulnerable (comorbidities etc.), as well as healthcare workers, the underlying goal of preventing socioeconomic disparities in the vaccination process has been harder to achieve, despite some cities going to great lengths.

New York City’s Mayor De Blasio said that 77% of the city’s vaccination sites are in 33 hard-hit neighborhoods, but in what he called a “profound” racial disparity, vaccines are disproportionately going to wealthier neighborhoods in Manhattan and Staten Island, according to data the city released Tuesday.

As Bloomberg reports, white residents composed almost half the people who had gotten at least one dose, despite being only a third of the population.

Interestingly Axios also reported that early analyses and news reports show that in many cities and states, people of color – particularly Black Americans – are falling behind white Americans in the vaccination effort, with experts claiming that structural barriers and higher rates of vaccine hesitancy would always be a problem.

“Just as we’ve seen a much smaller portion of vaccines going to Black and brown New Yorkers, we see these geographic disparities bearing out as well,” said Torian Easterling, chief equity officer of the Department of Health and Mental Hygiene.

“Staten Island and Manhattan have the highest vaccination rates, while the South Bronx, parts of central Queens and central Brooklyn lag behind.”

“Folks who have been doing very well in this society also have a high level of confidence in the vaccine,” de Blasio said.

New York City recorded the highest number of vaccine doses administered last week since the inoculation drive began in December, doling out more than 317,000 shots, de Blasio said Tuesday. But, as Bloomberg notes, the city still has a long way to go to cover its more than 8 million residents. New York had administered nearly 1.3 million total vaccine doses as of Sunday, including 870,6000 first doses. 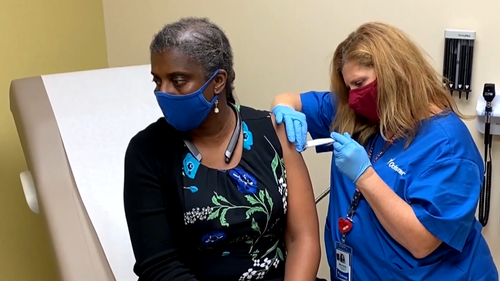 You can lead a horse to water, but a skeptic will not be jabbed! As CBS reported in December, recent data from Pew Research Center shows that only 42% of Black Americans would get the vaccine if it were available to them today. 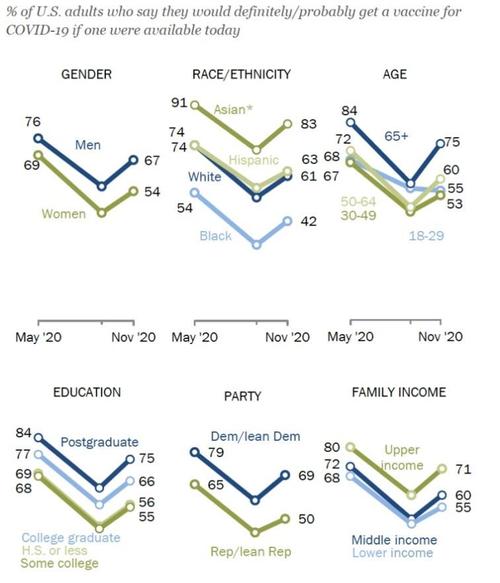 Finally, we also noticed to an interesting trend in the COVID-19 death rates. As Axios reports, the giant surge of COVID cases over the fall and winter hit white Americans disproportionately hard, narrowing the racial disparities in COVID deaths. 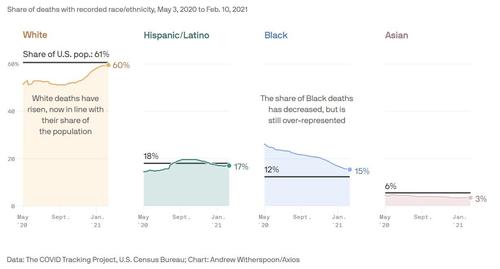 And perhaps most worryingly, given the racial bifurcation trend in vaccinations, if these disparities persist, particularly as new variants of the virus become more prevalent in the U.S., the gap between different racial groups’ death rate will likely widen in the coming months.