My theme this year has been that it’s going to be very complicated for financial markets with volatility high. The forces working in both directions (high growth and stimulus versus inflation and higher yields) are huge and both sides will dominate for periods causing us to move between extremes. There is little doubt that US growth is going to be very strong with our economists upgrading Q4/Q4 2021 growth to 7.5% last week.

With inflation this could mean nominal GDP getting close to 10%. The last time we were in double digits was the early 1980s. With these sort of numbers it has always seemed unlikely that bonds would have a calm low yield, low vol year. Even if growth and inflation eventually roll over in 2022 and 2023 we are not going to know for a few quarters yet. In addition without knowing who is going to win the mid-terms we can’t be sure that the Democrats aren’t going to dip into the fiscal well a few times more before the next Presidential election. When I talked about the inflation picture slowly turning before the pandemic, the major reason was that I thought we were moving more towards a helicopter money / MMT world and away from fiscal austerity. The pandemic has accelerated this and a Blue Wave has picked up the baton in its crest.

In risk, while many sectors and areas will benefit more from strong growth than lose out from higher yields, there is no doubt that some areas (eg US equities) are more exposed to secular growth (eg tech) than before and these have massively benefited from ultra low yields. This is a sizeable and influential part of the market.

Having said all this, there is little doubt in my mind that central banks will eventually lean quite hard against a sustained rise in yields. They simply can’t afford to see it happen with debt so high. 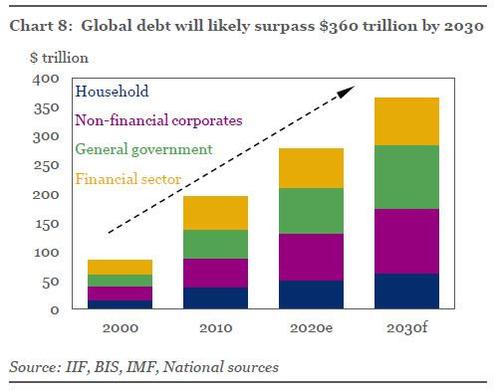 So far though, Fed officials have been largely relaxed over the recent moves, suggesting that it reflects more positive economic growth. But as it all happened so fast last week they will have had a chance to regroup and align their message for this week.

I’ll end this yield discussion by quoting my colleague Francis Yared (head of rates strategy) who said that the recent move had probably “happened too fast, but did not go too far”. He thinks that the (mildly so far) dysfunctional nature of the repricing should lead to some level of central bank intervention. It would make sense for the Fed to push back against front-end (up to Dec-22) pricing and the ECB to lean against the rise in longer-term real rates. However, from a medium-term perspective, the absolute level of yields is not too high given reflation proxies, the prospects for reopening and US fiscal policy

Capitol Siege: Four Veterans Give Their Firsthand Account on Thursday’s Protest at US Capitol

White House Releases List of President Trump’s Accomplishments – And It Is Historic!