Despite all those reports about 2020 being a terrible year for banker bonuses, but at least one cohort of the German bank’s 70K+ employees appears to have made out okay.

Deutsche Bank jacked up its investment banking bonus pool by almost 50% after what was a blowout year for markets, bringing the total to 413 million euros ($492MM) And with Treasury yields rising heralding higher borrowing costs in the not-too-distant future, the bank laid out a mixed picture for the rest of 2021.

It’s certainly a welcome change for DB’s bankers, who had grown accustomed to paltry scraps over the past 10 years as the German bank embarked on a hair-raising string of money-losing quarters (the bank posted annual losses for the fourth year in the last five during 2019, before swinging to profitability in 2020). 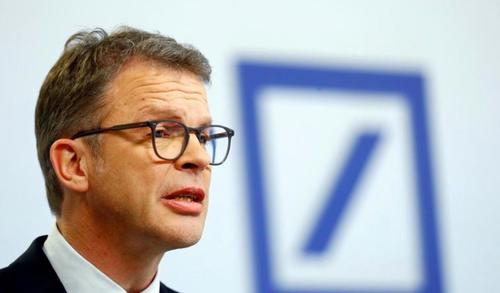 Investment bankers saw a 46% jump in variable compensation even as the ECB balked at plans to increase the total pot by more than one-third. Across all units, workers saw a 29% increase compared with smaller gains, or even cuts, at other major European lenders. 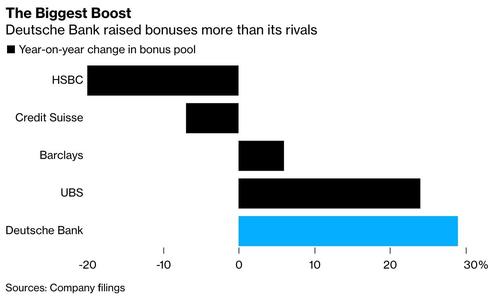 Deutsche Bank posted its first profit last year after five consecutive annual losses thanks to booming income in its trading unit as markets boomed in the wake of the pandemic.

The news was a welcome relief to CEO Christian Sewing, who is nearly two years into a restructuring plan that he hastily unveiled back in 2019 after plans to merge with fellow German lender Commerzbank fell through. It was later revealed that, at one point, fraudulent German fintech Wirecard had been in talks to buy DB, part of a plan to try and cover up the massive hole in Wirecard’s balance sheet.

Filings revealed that Sewing’s bonus was up 46% in 2020 to $8.8MM, prompting criticism from unions and politicians as the bank published its annual report on Friday. Unfortunately for him, the German public wouldn’t let Sewing savor the first sign that his turnaround effort might actually be succeeded where efforts led by his immediate predecessors had failed. The Verdi labour union called the payouts “grossly disproportionate” and politicians, who are gearing up for elections later this year, slammed the CEO for the high pay, which, of course, is merely fraction of the payouts enjoyed by his American peers.

“It doesn’t fit with the times that Deutsche Bank, which has also indirectly benefited from bailouts time and again, is having a coronavirus party,” Fabio De Masi, a member of Germany’s parliament, said in a statement to Reuters.

The bank, which has lost 8.2 billion euros over the last decade, reported a net profit for 20202 that was 113MM. This followed a loss of 5.7 billion the year before as a surge in investment banking earnings offset weaknesses in other business lines.

Looking ahead, the bank warned in its report that higher volumes and fees in the corporate and private bank will be offset by rate headwinds, while the asset management unit should see “slightly higher” revenues.

While DB’s problems were a particularly extreme example, banks as a sector have been neglected by investors during the era of ZIRP and NIRP, which have rendered banks’ core business – lending – unprofitable. But with yields on the rise, the market’s view on the sector is finally starting to shift.

Is Geoarbitrage a Lifestyle Option for You?

Watch Live: Joe Biden Inaugurated As The 46th President Of The United States