Did America’s Anti-Cop Movement Lead To Largest Homicide Increase In US History?

Did America’s ‘defund the police’ movement result in the largest percentage increase in homicides in US history? Heather Mac Donald, a fellow at the Manhattan Institute and author of “The War On Cops” makes a strong argument that it likely did. 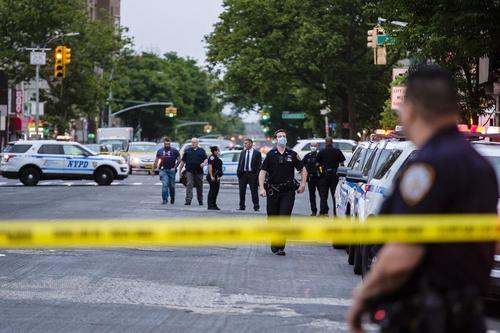 In a Sunday Wall Street Journal op-ed, Mac Donald notes that 2020 ‘likely saw the largest percentage increase in homicides in American history,’ noting that murder was up almost 37% across a sample of 57 large and medium-size cities. According to preliminary figures, “at least 2,000 more Americans, most of them black, were killed in 2020 than 2019.”

And while the establishment media is largely blaming the pandemic for the spike, Mac Donald says the chronology doesn’t support that assertion – and President Biden’s criminal-justice policies stand to exacerbate the ongoing crime wave while ignoring its causes.

The local murder increases in 2020 were startling: 95% in Milwaukee, 78% in Louisville, Ky., 74% in Seattle, 72% in Minneapolis, 62% in New Orleans, and 58% in Atlanta, according to data compiled by crime analyst Jeff Asher. Dozens of children, overwhelmingly black, were killed in drive-by shootings. They were slain in their beds, living rooms and strollers. They were struck down at barbecues, in their yards, in malls, in their parents’ cars, and at birthday parties. Fifty-five children were killed in Chicago in 2020, 17 in St. Louis, and 11 in Philadelphia. In South Los Angeles alone, 40 children were shot, some non-lethally, through September. –WSJ

The MSM, such as the St. Louis Post-Dispatch, suggested that the increase is due to the “economic, civic and interpersonal stress” caused by the COVID-19 pandemic. Chicago Mayor Lori Lightfoot similarly blamed pandemic-related “frustration, anger … trauma and mental health challenges.”

However, this doesn’t square with the fact that crime actually fell during the first few months of the pandemic lockdowns – both domestically and abroad, only to reverse itself in May in the United States, “thanks to a surge in drive-by shootings.”

On May 31 alone, 18 people were murdered in Chicago – the city’s most violent day in 60 years according to Paul Cassell, a law professor at the University of Utah. Elsewhere, American cities saw ‘similar spikes in mayhem, all tied to the street violence unleashed by the death of George Floyd,” a black man who died while in custody of the Minneapolis PD on May 25 after an officer knelt on his neck for over eight minutes, while having fentanyl and methamphetamine in his system – and being COVID-positive – at the time of his death.

As Mac Donald writes, “The political and media response to Floyd’s death amplified the existing narrative that policing was lethally racist,” adding “The ensuing riots received little condemnation from Democratic leaders and a weak response from the criminal-justice system.“

Since Floyd’s death, police have faced a ‘poisonous environment,’ having been shot in the head, firebombed, and assaulted with lethal projectiles. Those who attempt to provide aid in the field risk being pelted with rocks and bottles.

One Oakland, California officer who has arrested ‘dozens of known murderers and gang members’ told Mac Donald that he’s scared for the first time, “not because the criminals are necessarily more violent, even though they are,” but because if he has to use force on a suspect, he stands to lose his job, his liberty or his life. A “simple cost-benefit analysis” would suggest the safest course of action for officers is to simply recall to calls for service and collect a paycheck.

“All cops now understand this,” the officer said.

One veteran Chicago detective said “Every day you have to decide whether to get out of your patrol car and do something or do nothing,” adding that if anyone attempts actual police work, they may end up in jail or without a job if things go sideways.

“Proactive police work is dead,” said Police Lt. Bob Kroll of Minneapolis, where police stops fell by more than 50% over the summer. Elsewhere, such as Philadelphia, New York, Los Angeles, Oakland, Chicago and elsewhere, the number of police-civilian contacts have plummeted.

Meanwhile, anti-gang units and other specialty units across the country which got guns off the street were disbanded due to having a ‘disparate impact on African-Americans,’ while police chiefs and prosecutors alike have refused to enforce low-level ‘quality-of-life’ laws for the same reason.

As a result, “More gang members are carrying guns, since their chances of being stopped are slim. They are enthusiastically killing each other and innocent bystanders out of opportunism, not economic deprivation or existential angst.“

Meanwhile, 2020’s violence has only accelerated into the new year – with shootings in South Los Angeles jumping 742% in the first two weeks of the year, while Oakland homicides were up 500% and shootings up 126% through Jan 17. Murders in New York have jumped 42% and shooting victims 15% during the same period, while carjackings in Chicago are up 135% in Chicago.

On Jan. 16, a woman was pulled from her car in Aurora, Ill., and shot in the back by carjackers who had already stolen two vehicles earlier that day. Four other Chicago suburbs were hit that weekend. In Chicago proper, there have been 144 carjackings through Jan. 21, with 166 guns recovered. –WSJ

President Biden, of course, is fanning the anti-cop flames – arguing during the campaign without justification that African-Americans ‘rightly feared that their loved ones could be killed by a cop every time they stepped outside.’ Now, his administration’s criminal-justice blueprint aims to get rid of racial disparities in law enforcement – which would eliminate much of law enforcement itself.

Read the rest of the op-ed here.